This isn't getting the artwork from Apple Music tracks, though? Right now, for me, this displays whatever the last album art displayed was before streaming began. Would be great to be able to get the actual artwork.

I'd image there's a way to get the artwork url? It's possible through Spotify. I'll look into it further.

Possibly the Discogs API could be used to retrieve cover art in that case: https://www.discogs.com/developers/ (sorry I don't have a lot of time for BTT until end of next week, our wedding party is coming up this weekend :-))

No stress! You're allowed to take some time for yourself, you do plenty for us

Enjoy your weekend, and I hope the wedding was/goes amazing!

Is it possible to do the same for Spotify? Display artwork of playing track.

Hi there, I have tried this and 3 other ways to get an iTunes now playing widget to work in Mojave dev beta 6 - is it the case that AppleScript is not functioning correctly in the beta yet? I just cannot get any widget to appear at all.

Has anybody tried combining this with a play/pause function? That would be epic!

Update: forgot I could do this simply with btt actions

Does anybody have a fix for Apple Music? the entire buttons disappears as the script fails to run when playing from non-downloaded music

Hi @Philip_Aarseth!
Scroll up a little ways, I found a way to work with this:

@GoldenChaos I haven't faced issues with Spotify, although it for some reason has converted Spotify to Spotify (Old) in my script? Then again the Spotify app has changed to Spotify (Old) for me too. Not sure what's happened. I rarely use Spotify though so hard to comment on. I did come across an issue with iTunes if you use Apple Music. As the artwork is streamed it creates some issues searching for it. I was able to fix by checking if an artwork is available first though. Full iTunes code can…

I have a problem with spotify, the cover art is flickering on touch bar. Is it me only?

This script is rather inefficient regenerating the artwork and fetching the data upon each check. Personally I use an (old) script/app I wrote that polls when the track changes (and also uses non-embedded artwork).

However here's an updated script for iTunes that avoids much of the overhead by simply checking if the track actually changed before going off and doing stuff—so not unduly expensive on a frequency of say 8 seconds. Recommended with action of 'Play/Pause', icon size of 30, 0 radius, black background, and font size of 12 because it displays album, track and artist on two lines. (Does not change on pause.)

A similar approach should be possible with other apps, but if they don't provide an ID or URL you can just check if the album name changed. Could reuse the same BTT variable across apps although better as string if so.

I've got this same issue. Works great for music I have put into my Library, but if I am listening to non-downloaded/non-library music, the icon disappears.

Edit: I am an idiot and did not read replied posts.

Here is my version of the code which downloads the artwork from Apple Music using the iTunes search API. I couldn't make it work otherwise.

What it does is basically taking the name, artist and album, sending the request as follows:

Very very nice!! I'm desperately failing to do something like this for weeks now!
Would you mind if I added this to my next Preset update? Credits given at the end of the code of course. Man I love this!!

Edit: I encounter an error that seems to appear randomly: The script gets an error displaying "Can’t get resultCount of ""." (second line after using the JSON helper).

Edit: I encounter an error that seems to appear randomly: The script gets an error displaying "Can’t get resultCount of ""." (second line after using the JSON helper).

I will look into it, can you please give me an example for a track that causes this error?

). If it bugs it happens because the Script is unable to get the ID of current track (like with the Riddle).
Perdermi by Zero Assoluto returns the iTunes cover.
The Riddle by Nik Kershaw prevents showing anything, neither the cover with your script, nor the song information through mine 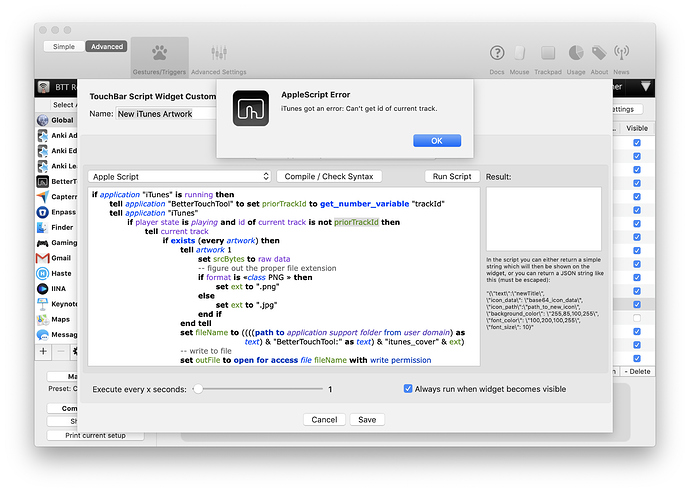 Also: I use the widget twice, once in my main strip, and in a group. If I change the song to another album while one of them is hidden, the hidden one won't update when it becomes visible - so basically I have always one showing the album of the previous song (yes, 1sec interval refreshment is active, and so is the "Always run when widget becomes visible" box). But this might be rather a #bug-reports for @Andreas_Hegenberg? idk

Also: I use the widget twice, once in my main strip, and in a group. If I change the song to another album while one of them is hidden, the hidden one won't update when it becomes visible - so basically I have always one showing the album of the previous song

This is [probably] because this version of the script checks wether the current song has already been handled to avoid running it multiple times at every X seconds based on your settings. See this line:

You have two scripts. The first one will run, setting the priorTrackID to the current song. The second script will start running a few seconds later, and the current track will be the same with "prior track", so it will do nothing. To check if this is the problem, you can change that line on both scripts to:

This isn't very good performance-wise. Could be improved by keeping the actual track data, maybe I'll add an updated version tomorrow if this fixes your problem.

Regarding the artwork problem. On some songs, the iTunes Search API has no data, IDK why. You can check that out doing the curl in Terminal manually or using Postman. For instance, there's no record for Perdermi by Zero Assoluto. The others work fine for me both with the script or by manually sending the request 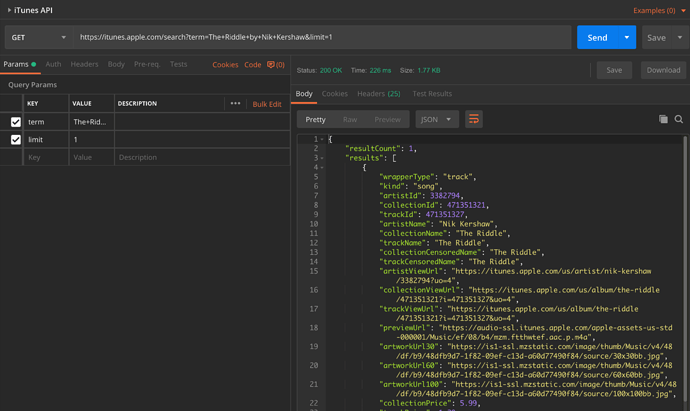 Yeah, I found that line, I had done the same quite early

Replaced it, and here we go with: 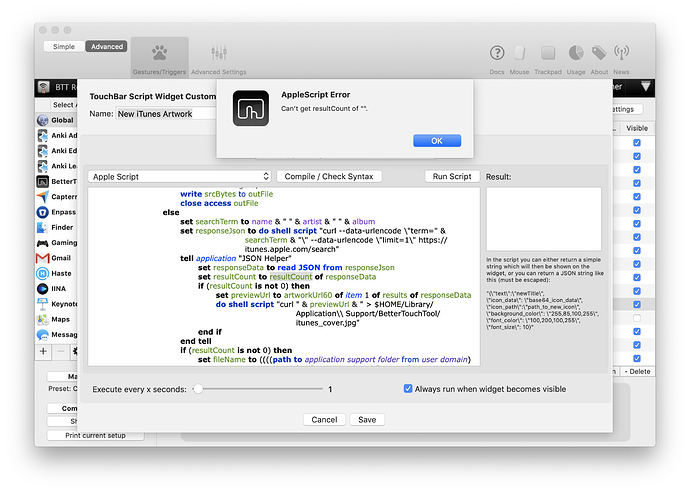 Happens now with absolutely any song from outside my library