Different settings for a program when external monitor is connected

Hello. I use lightroom classic with BTT and most of my triggers move the mouse cursor to a specific position (slider) so that I can adjust it with the arrow keys.

When I connect an external monitor and move Lightroom to the new monitor, all of my mouse positions no longer work. I'd like to have a separate set of triggers (mouse coordinates) for lightroom when I have my external monitor connected. What's the best way to set this up?

I had a similar need for when I was at work and connected to my monitor versus when I was at home just on the laptop. I found that the best way to do this would be to create two PRESET that are specifically for when you need the different set of triggers. The first preset would contain the normal commands triggers and could be on normally all day/every day. The second PRESET, Once you create it, you can then set the new triggers and commands inside of it. Then set a button or command (either on the touch bar if you have it or possibly the menu bar or could create a keyboard shortcut) in your GLOBAL PRESET to activate the PRESET with the different triggers while deactivating the PRESET with the first set of triggers. Then do the same for the opposite fact, deactivating the new set while activating the normal set.

Best way to do the button/command is to use the action 'Toggle Presets Enabled/Disabled' This way you don't need two buttons or commands, you would just press the same one when done with the extra monitor. You would do two 'Actions' on the same 'Trigger'. Have one preset on and one off when first doing the command, that way while one became enabled, the other would be disabled.

Let me know if that doesn't make sense or you need some help! Good luck!

Thank you so much for this comment. This is exactly what I want to do.

I have created a preset called Laptop Screen and another called Desktop screen.

Within each preset, I have created a single mouse move action bound to keyboard button E.

However, no matter which preset is active, when I press the E key, I get a popup at the mouse cursor that lets me choose which of the two sets of coordinates I'd like the mouse to go to.

It seems to be checking both presets regardless of which one is active. I'm sure I'm missing some basic setting here, but do you know why this is happening? I had tried to create a preset before and the default keyboard binds that I had were doing this same thing - offering me the option of either the default mouse coordinates or the new mouse coordinates I had set with the new preset. I was hoping that the default preset was somehow special and that if I made two new presets, they wouldn't share the keyboard bindings, but alas I need to figure out how to have the other preset turned off when one is on.

Thanks for any guidance!

I have added a new condition to conditional activation groups that let's you activate based on the current screen resolutions. This also can match for multiple monitors (v3.808 alpha) 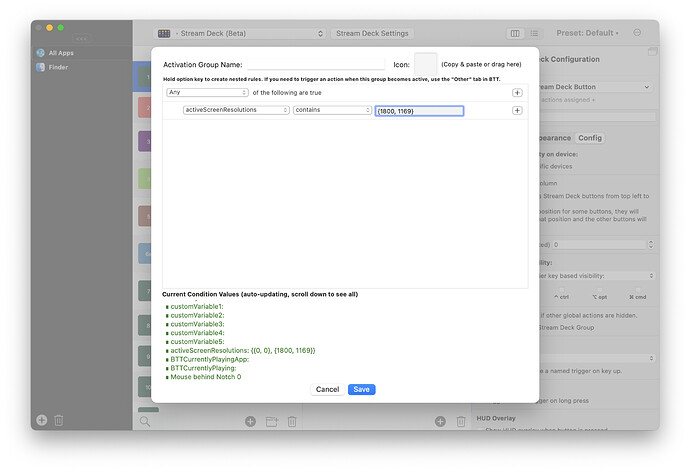 I have added a new condition to conditional activatio

That's sooo cool! Blows my solution out of the water!

@Andreas_Hegenberg I tried this, but it seems that when I'm connected to my external display, it' shows both the windows in the active screen resolution values area.

atter which preset is active, when I press the E key, I get a popup at the mouse cursor that lets me choose which of the two sets of coordinates I'd like the mouse to go to.

@JKicker So to answer this just so you know or if you need later, even though Andreas has a much better solution long term. So I tried some solutions and here is what I got to work.

You should now have two Triggers that look the same except for the color to the left of it that signifies its preset.

Now when you press F1 or F2 depending on the preset you want, it will turn on that preset and allow you to use that 'E' command only!

I know that is alot so if it's really confusing let me know and I can try to make a video or something!
Hope it helps!