I'm trying to set up a custom Emoji Widget in order to type in International Phonetic Alphabet (IPA).
So I put the following Unicode characters as my "favorite emojis" :
ɑɒɯɐɛəʏʊɥʉɨɪɔ
(they are from the unicode range U+0250 to U+02AF, called "IPA Extensions")
But it looks like the font that you are using in the Touch Bar for the Emoji Widget can't display those characters (to the exception of the "ə" which is correctly displayed).
=> Could it be possible to have a setting to choose a particular Unicode font to be used ? (such as Doulos SIL or Quivira for example). If possible, such setting should be specific to each widget.

You can use some basic html in the button title which would allow you to override the font, e.g. 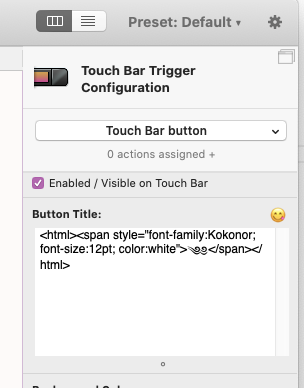 Ah I forgot you need the emoji widget, I think there this is currently not possible. I need to check whether I can somehow have a generic font setting somewhere.

However maybe you can build your own emoji widget for now by using normal Touch Bar buttons and assign the "Paste Text" action to them.

Thank you very much for your quick and relevant response

Your solution works perfectly, EXCEPT that there seems to be a Unicode encoding problem inside the html code : if I try to put the symbols directly inside the HTML tags, as you suggest, I get some scrambling characters (3 bad characters for each one that I wanted).

The work-around was to use HTML Unicode escape character sequences, such as &#x0250; instead of the character itself (here, U+0250).

It seems that the HTML code is misinterpreted as being encoded in some sort of ISO-8859-1 / windows-1252, instead of being UTF-8.
=> Perhaps should you add an encoding="utf-8" tag within the generated HTML code to fix it ?

Ah good to know. The HTML available in the title field is quite limited, it's only a specific subset that's available on macOS for initializing "attributed" text labels. I think it might not support the UTF8 encoding header.

Ok, I see, then maybe you should automatically convert Unicode characters above U+00FF into HTML Unicode escape sequences &#x....; before sending this HTML code to macOS's library ? That would fix the problem from the user's perspective.

Hi, I'm looking for a way to display images on the touchbar, not icon.