Describe the bug
I was experiencing this issue with BetterSnapTool, so I downloaded BetterTouchTool to see if it fixed the issue. Unfortunately, I'm getting the same behavior. After resizing a window with a custom snap area, if I try to move the window, it reverts to the previous size.

If I'm not recording my screen – which, believe it or not, I don't have a video for – the window reverts to previous size on the first move regardless of the window height. (By the way, I removed screen recording permissions for all apps other than BetterTouchTool and restarted my computer before taking these screen recordings.)

Additional information (e.g. StackTraces, related issues, screenshots, workarounds, etc.):
If I custom-snap a window then manually resize it before moving it, the window does not revert size.

restoring the previous size on move is the default behavior, but you can disable that in the window snapping preferences! (currently not on my computer, can post screenshot later)

Oh wow. Thank you very much. This is not the first time I've had an issue that you've already foreseen and created a setting for. Very well done!

I know that changing default settings runs the risk of annoying existing users who've come to expect one thing, but for what it's worth, I find the window resize on move to be jarring.

For anyone who's coming here for the same reason, here's a screenshot of the setting location: 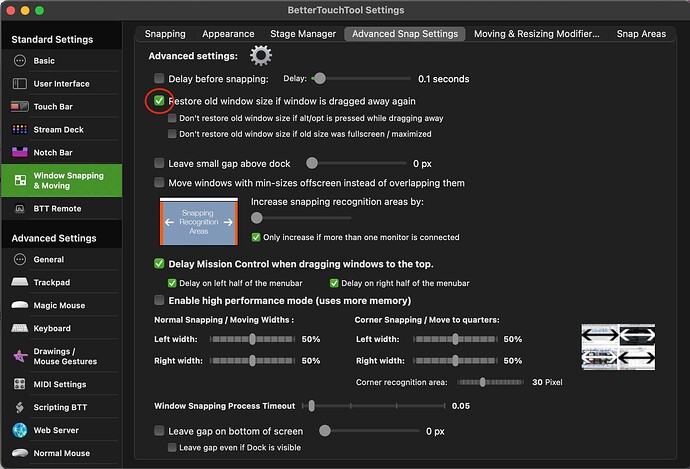 hehe this default exists since 2009, I really can't change that

But as far as I know most users expect it to be like this because they are used to it from other operating systems. I think most of them restore the previous size by default