In several apps, when I press Command+Shift+[another key] it brings up a rogue context menu.

In Craft, Command+Shift+B to highlight brings up one with just "Context Menu" in it.

When in Pixelmator Pro, Command+Shift+E (for export) brings up another one with random items filled in. You can see in the screenshots. The one with the alligator icon is some kind of German "mydealz" website...

I've confirmed it's BTT by quitting the app completely and the context menus don't show after doing that, the keyboard shortcuts function as intended. 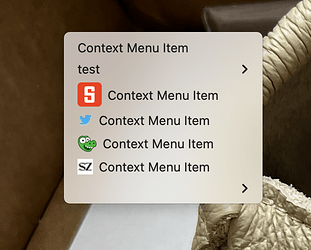 oh did you import some example preset? These are context menu actions defined in. the keyboard shortcut section in BTT. You can just delete them

Maybe I had them included in some example preset accidentally.

ah, I just imported the Stream Deck example profile and have slowly been editing the examples included, so maybe that's it. I'll try deleting them and see if that fixes it.

I went in and deleted the example Stream Deck profile and that fixed it. Thanks!