I had bettertouchtool set up so that if I double tapped with three fingers it would enable the Mac zoom feature (found in system preferences>accessibility>zoom) by executing the keyboard shortcut option+command+8. For some reason I can't turn it off now. Even if I quit BetterTouchTool completely and uncheck the box in accessibility>zoom that says “use keyboards shortcuts to zoom”, double tapping with three fingers still turns on the zoom feature. I can even adjust it still in accessibility>zoom to choose between split screen, full screen, or Picture in Picture, but I can’t turn it off. The keyboard shortcut itself stops working, but double tapping still does it. I've tried restarting and starting in safe mode and nothing changes it. It's like BTT has permanently linked double tapping with three fingers to the Mac’s zoom feature. I also tried changing the gesture to a different action in BTT, but it does nothing. The new action doesn't register at all and zoom is still activated.
It's especially annoying because it's extremely easy to trigger. Adjusting the three finger tap trackpad settings in BTT seems to have no effect either.

I guess I'm just going to have to reinstall Big Sur. Pretty lame. I don't think I'm going to continue using BTT after this.

BTT doesn’t change any permanent settings and only works while it is running - it’s technically impossible that this is caused by BTT if you have quit it. BTT only intercepts touch events „live“ while it’s running.

Maybe this is some accessibility setting you accidentally changed?

As far as I know there is no way to do this with Mac's own settings. And I've never used any other software that has anything to do with changing the functions of the trackpad. It can't just be a coincidence that the exact gesture that I set up with BTT is now the one that continues to work even after I quit it. Clearly there's some connection. But like I said, I also can't assign anything else to three finger double tap now. So, technically I guess the issue is no longer with BTT, since the behavior persists even after quitting it, but it was definitely caused by it. I guess the next thing I'll try is completely uninstalling BTT. After that though, reinstalling Big Sur seems like the only option. Or maybe I'll talk to Apple and see if they have any ideas on how to reset just the trackpad, if that's even something that can be done. I used the same gesture for zoom for years on my old 2015 MacBook Pro with no issue. So, maybe it has something to do specifically with the M1 MBP's.

I just did a quick google search.
You probably accidentally enabled this: 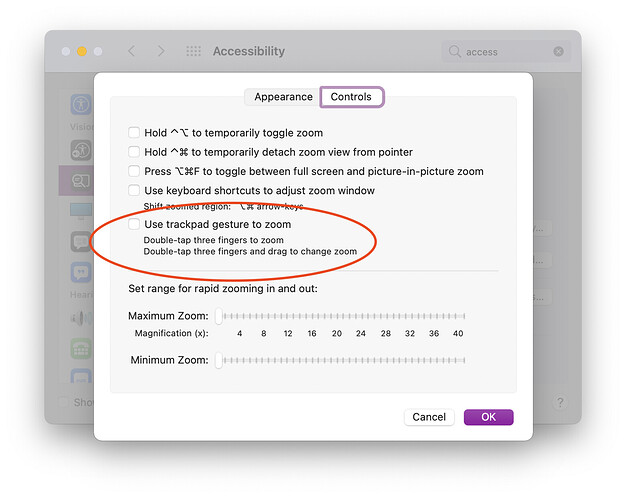 BTT does not touch this setting ever, so this must have been manually activated or by some other app. This seems to be a relatively new Accessibility feature.

That was it! I've never even seen that part of System Preferences before. If BTT didn't enable that, then it must've been on already, before I even installed BTT on this computer. That's an insane coincidence that they just happened to add the exact same gesture for zoom that I've already been using. Doing it the way I have been though (using the keyboard shortcut linked to three finger double tap with BTT) works much better than their system option, which is much too easy to trigger and also does weird stuff where sometimes it zooms in just a very small amount. Anyway, thanks for the help.

Maybe the system automatically enables this when some other accessibility functions are used? Anyways, glad you got this resolved without reinstalling macOS!