BTT and BST both freeze apps

I have bought BTT as well as Better Snap Tool and both programs have the issue when I open the calendar or pdf app and I press "Command + W", the apps don't close like when the programs are not running. When I quit the tools, my calendar app and pdf app closes as expected when pressing "Command + W". Any ideas why? Its really bothering me...

It's automatically disabled if no keyboard shortcuts are defined in BTT / BetterSnapTool. Are you using custom snap areas? (they can also have shortcuts assigned)

No, only the predefined ones. I haven't customized anything in Better Snap Tool and still the same behavior.

@Andreas_Hegenberg It's not like that command w isn't working at all. The app closes, but it continues running in the background (symbolized by the dot in the dock under app icon), If Better snap tool isn't running, the calendar app totally closes when pressing command w (no dot under the icon).

On my system it behaves like that regardless of whether BTT is running or not. Not sure how the calendar app decides whether it quits completely or stays open, but I can not influence this behavior from within BTT. Maybe certain system APIs cause it to stay open.

In theory you could map cmd+w to cmd+q for calendar, but this might conflict with some sub-windows. 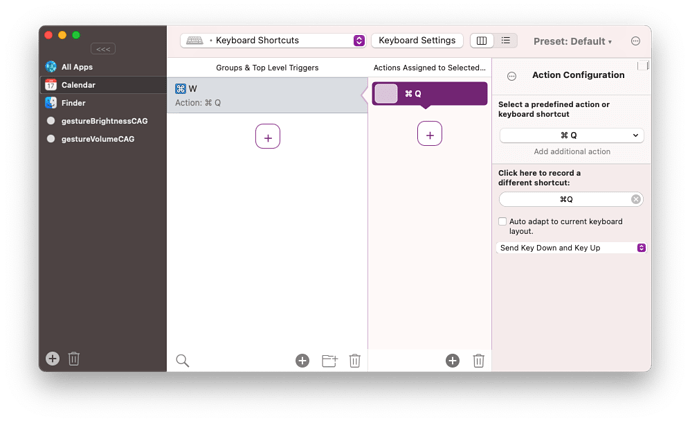 That's not solution for my issue, because all applications behave like this (still running in the background symbolized with a dot in the dock). Same problem for the pdf app.

I opened the Preview app and loaded an image. I then hit Cmd+W to close that image. The Preview app remains open. This is the case whether or not BTT is running or not (I tested the same steps both with BTT running and not running).

The macOS programming guide even recommends this behavior for apps. The system should be responsible for terminating apps that aren't in use. You, the user, can terminate an app yourself via Cmd+Q, but it's not a requirement that an app terminates itself when the last visible window is closed with Cmd+W. Such behavior would go against the core design tenant Apple recommends.

It only remains open for me when BTT is running. If BTT is not running, I can close the app with Command + W and click on the Desktop. Then the system closes the app automatically.

I think the behavior you are seeing is called „automatic termination“. Here the system decides when to quit an app.

However this is up to the system and I don’t think there is a way to influence the behavior. Maybe the system keeps apps awake longer if other apps are running that use the Accessibility features. (e.g. BTT or BetterSnapTool)

Still weird how BTT influences this behavior. If it effects automatic termination and the system doesn't close apps anymore, more memory is used....

Would be interesting to see whether the system closes the apps once you run out of memory. Otherwise this might be a bug we can report to Apple.