Describe the bug
The "now playing" touch bar widget doesn't refresh the song album art when a song first begins to play (e.g. a song is double clicked in Music.app (the macOS 10.15 version of iTunes), or the next song on a playlist beings to play).

Additional information (e.g. StackTraces, related issues, screenshots, workarounds, etc.):
The workaround is to force the widget to refresh by tapping it, which in turn seems to fetch the album art of the currently playing song.

That's probably a issue with the music app, but I'll look into this stuff as soon as I update my main machine to 10.15 (plan to do so with beta 3)

Yup, seems to be a bug with macOS. It's in the Catalina Beta 2 release notes: 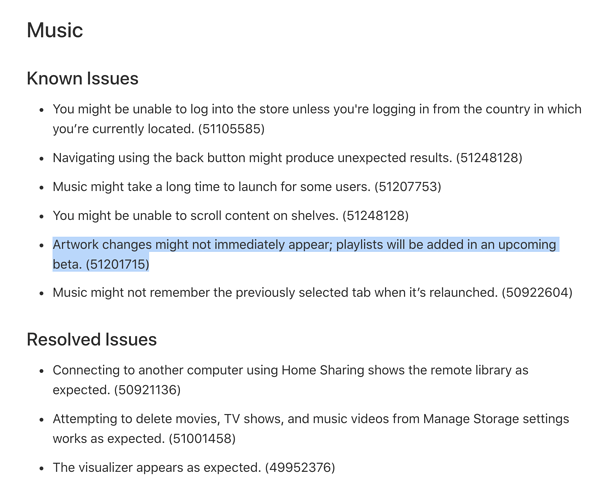 For anyone interested, it seems like album art is working better in Catalina Beta 2. There's only about a second delay between when a song starts playing and when the album art is shown on the BTT Now Playing widget. However, Apple needs to fix the default Now Playing control strip button with regards to Music.app. It doesn't show up when a song is playing. Rather, the only way I can get it to show up is to finish a song at the end of a queue, e.g. play the last song in a playlist or album, skip very close to the end, and then wait for the song finish. Then, the Now Playing widget works in both the default and the BTT touch bar.

This affects the BTT widget because, I guess, macOS doesn't seem to realize anything is playing until the "end-of-queue" workaround described just above is run.

Thanks for the update! I'm sure this will be fixed before the final release

I am still seeing this problem (album art rarely appears in Now Playing widget in 10.15.7). Has this specific problem been fixed, and I am seeing a new bug?

Same issue for me, the album art doesn't change automatically with song changes unless I manually pause and play the song again

I am also experiencing the same problem while using Spotify and while using safari because it will show the safari album of a YouTube video that I just watched even if I start to play a new Spotify song.

This used to work fine for me for a while, but a couple of months ago this stopped working. Now safari thumbnails of the last played youtube videos are displayed instead of the currently playing album cover

I'm also experiencing the issue with Spotify artwork. On track change, the artwork doesn't change or reverts to the app icon. Pause/play toggle via the Touch Bar refreshes the artwork.

Other media sources like Music app, YouTube (Safari) are working fine, but as reported by @Manderson above the artwork from these sources linger even after they're closed and Spotify is the current Now Playing source.

NB: Using v3.741 as my license has expired and I've got a new Mac on the way without a touch bar. But I'll try out the Notch bar and see if I might renew