Background process is damaged and can't be opened.

After upgrading my Mac to MacOS 13.0 Ventura (release, not beta), upon logging in to my Mac user account a dialogue appears:

"BetterTouchProcessPrioWatcher" is damaged and can't be opened.
This file was downloaded on an unknown date.
SHOW IN FINDER ––– OK

When the dialogue is dismissed with the OK button, it reappears several seconds later, interrupting any user input. The dialogue continues to appear when BetterTouchTool is quit. I was using whatever version was the "regular updates" version of BetterTouchTool so I updated to the current "alpha" version which is 3.922 (2085); no change in behavior. I restarted my Mac (twice) after running the alpha install.

I attempted to quit and force quit BetterTouchProcessPrioWatcher using Activity Monitor but this failed: The dialogue continued to reappear every few seconds.

I can leave the dialogue box open instead of dismissing it and move it to a corner of my screen to keep it out of the way and to prevent it from repeatedly appearing and interrupting me every few seconds. BetterTouchTool seems to be working normally other than this annoying dialogue box. 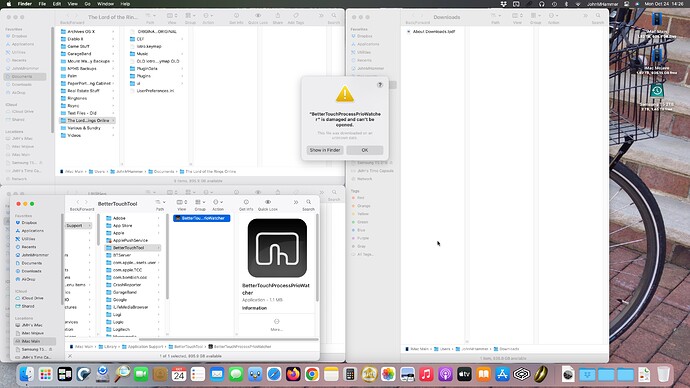 I think you can delete it from that Finder location, the process priority helper should not be necessary on ventura anyways

Even better, use the uninstall option here: 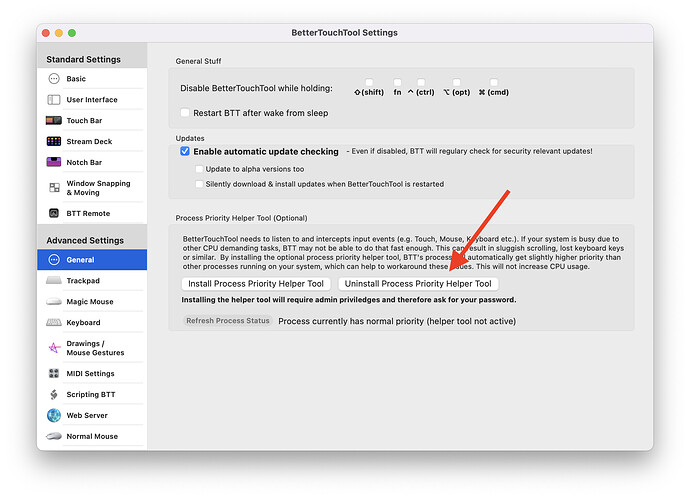 Thank you, Andreas! That did the trick. I didn't even have to restart my Mac afterward (although I did restart BetterTouchTool, I'm not sure it was necessary, though).