Does anyone know how to Configure an app to Auto hide/unhide when the cursor is moved to the edge of the screen? Apple has hot corners which I have populated already. There are some apps that have this functionality built in. But most do not. I did find an option in BBT to have an app open and close when the track pad is configured that way. This is nice but not exactly what I’m looking for. The “Unclutter” app does what I’m looking for except you must double click the upper edge of the screen instead of just using your finger to move the cursor on and off the screen.

I would also like menu bar items to automatically drop down when my cursor moves over their menubar icons instead of having to click on the icon. And if the action is to open the app instead of a drop down menu, then I’d like it to do that as well. I use Vanilla to collapse/expand the menu bar but don’t see any see preferences to auto open items when cursor goes over the icons. And I check Bartender 3 and don’t see options for that either.

Maybe there are third party apps to force these two things to happen. Maybe BBT has something as well that will help configure this per app.

Do you have an example for what kind of app this would be useful?

Maybe you can make use of the "Move Mouse to Top Edge Of Screen" and "Move Mouse Away From Top Screen Edge" triggers in the Named & Other Triggers section in BTT: 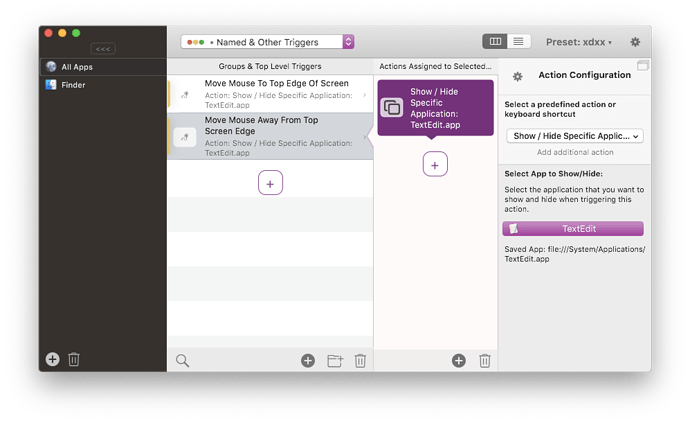