Describe the bug
This bug occurs when running a .app created by AppleShortcuts which calls a BTT Named Trigger.

If the Shortcut is run manually directly from AppleShortcuts it seems to work as intended. If however the Shortcut is called by the .app of the Shortcut, it only runs correctly the first time, but none after that. No error is given until BTT is restarted, at which time several errors will pop (depending on how many different shortcuts the user tried to run).

Also, just to note, my use case for .app Shortcuts is that I use a Logitech G604 which has a total of 22 buttons (when using a Shift modifier) that are not recognized by BTT. The Logitech apps allows for these buttons to be mapped to launch applications. Thus I am using these .apps to launch "Other Triggers" in BTT which are configured for each of the buttons. The discussion that lead me to this solution can be found here.

Sorry I know this is a little complicated. Let me know if you have any questions. I've included screenshots of the configuration and the errors below. Hopefully they'll clear things up. 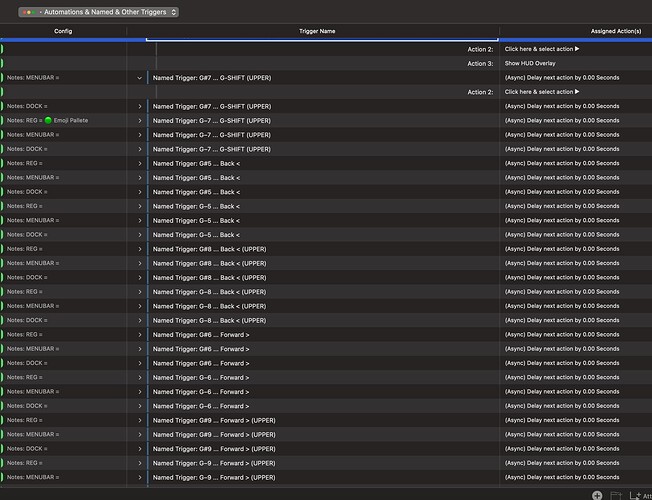 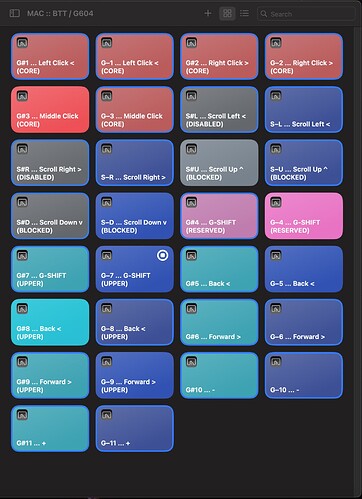 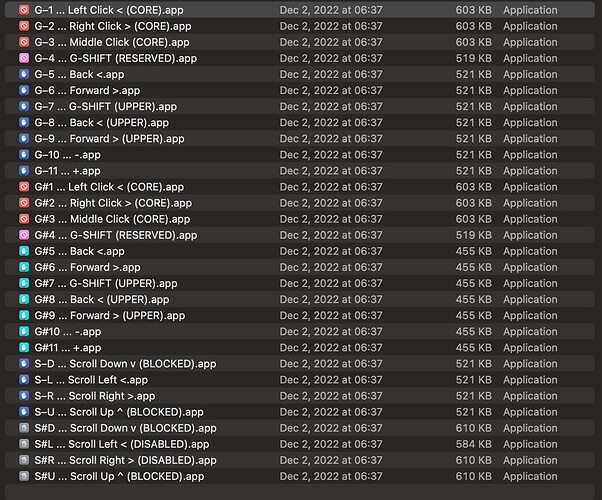 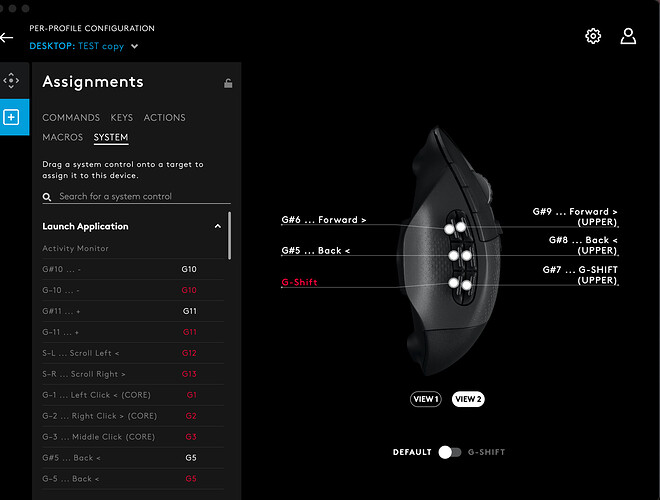 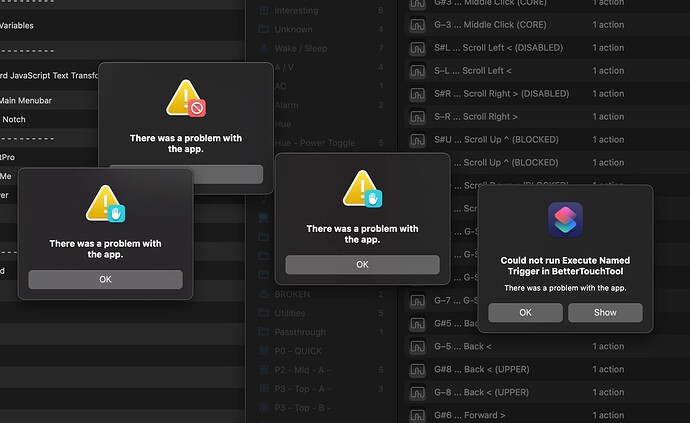 For now I have reverted back to my previous configuration using Keyboard Shortcuts configured to each Mouse Button to activate Keyboard triggers in BTT, which is how I have managed things untill now.

I suppose I could also try to make the Shortcut run AppleScript, but I a little hesitant seeing as AppleScript is itself not well optimized and I feel I'm already getting delays from routing this through shortcuts.

Also, this is just an idea and not an actual request as it is niche and not something I'd expect to be done or even know whether it is valid / possible, but if you wanted to, maybe a possible solution to this would be for BTT to have a minimal companion application that accepts launch parameters either in the form of a named trigger or UUID and passes it on to BTT. The Logitech G604 software does allow for parameters to be specified when launching apps.

All of these sound really bad, launching an app like this is really inefficient for triggering stuff in BTT.

Does the Logitech Software maybe allow to send keyboard shortcuts that you could intercept in BTT? (with the keyboard specific option)

//edit: ah I see that's what you have been doing before. What was the reason to change this?

I'll checkout the latest Ghub software tomorrow and see what is the best way to trigger stuff in BTT from it.

To be honest I've been pretty content with the way it has been thus far. So don't stress about it, I know this is probably really niche. I was just trying to see if there was a better / cleaner way to set this up.

The thing that bothers me most is just how unorganized it is to have Keyboard Shortcuts that pertain to the mouse mixed up with other keyboard shortcuts. Also, I can't name Keyboard shortcuts. All I have is Notes and it is not enough to amplify the setup, which is why I have left it fairly simple (no over dock / menubar triggers like the ones I tried setting up in Other Triggers). It will also sometimes conflict with other software shortcuts despite me using some pretty non standard modifers+numpad combinations, but it is a pretty rare occurence. I've also run out of feasible shortcuts with this, though I'd like to configure other things.

Of course, my real wish would be to be able to configure non standard buttons from within BTT in the "Normal Mouse" section and keep everything tidy, but I know that the issue is that BTT / MacOS just doesn't receive any input when it comes to these extra buttons unless something is specifically configured in the third-party software.

Just a heads up that in concerning this thread, the Logitech software allows the user to configure Multi-Key Macros and to Open Apps (with optional launch parameters). It doesn't allow opening URLs as far as I can tell. 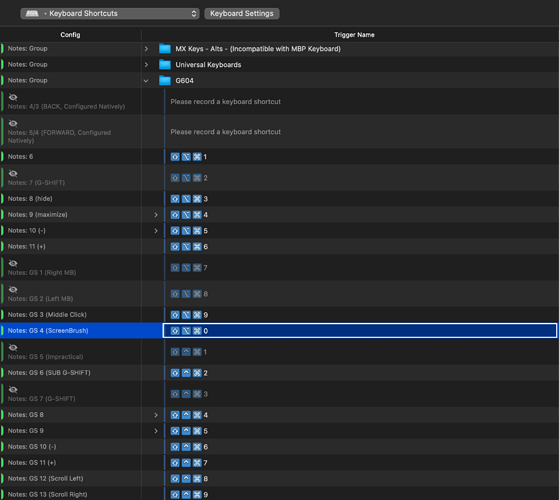 This G Hub app is strange.
It seems to be possible to create plugins ( ghub-obs-plugin/ at master · Logitech/ghub-obs-plugin · GitHub, but I can't find any documentation on that. This would probably be the cleanest solution.

I'll try to search a bit more, maybe I can find something.

Oh yeah, now that you mention it I did remember seeing this: 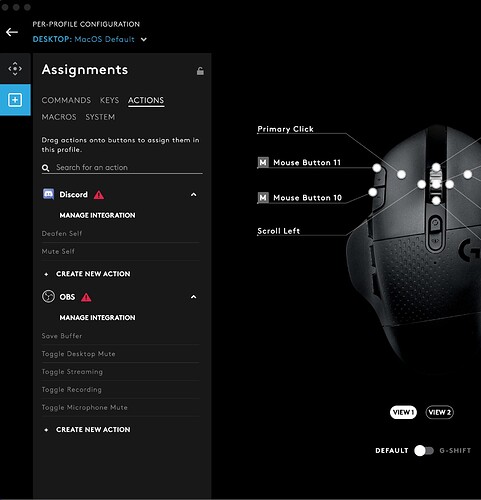 I think I found the repo for the OBS one. Seems it was made by Logitech themselves. Maybe you could try reaching out to the contributors?

Excited for this now!! Hope it works out.

Unfortunately the contributors seem to be accounts specifically created for this plugin, without any other activity - and nobody replies to the issues in that repo ;-(

That's pretty weird, they have a full plugin system ready, but absolutely no documentation.

Ah yes, indeed. Well, in that case, I have gone ahead and reached out to 3 software people at Logitech G to see if anyone is willing to point us in the right direction. I'll let you know if I hear back from them!