Add own options to GoldenChaos: what is the best option (update wise)

I can imagine that the third and fourth are a bit difficult to maintain if there is an update. But is there a way to keep my own buttons (the first and second one) while maintaining the sort order within Golden Chaos. It that possible?

The best option right now is to make your own separate preset that runs alongside GC. There you can add or modify GC widgets manually, and updating GC won't affect anything in your own preset! You are correct that this means altering button widths might not be worth it, but you could definitely do many of the other things this way

Here's where you manage presets, just make a new blank one for yourself and name it whatever you like: 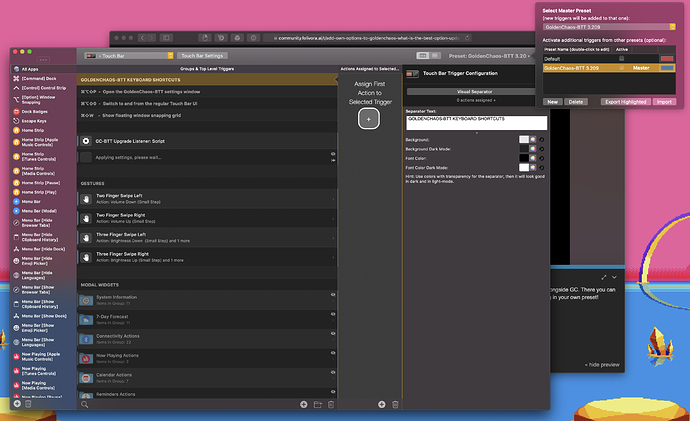 Once you've made your new preset, set it as the master preset and all new widgets will be added to yours now instead of to GC. You can copy widgets from GC into yours this way as well! Once you've copied a widget from GC, you can uncheck it so you're not display the widget twice. However, be aware that copied GC widgets won't react to settings menu changes - you'll have to manually alter your widgets if you want to change their settings.