Add Option to "Hold Keys Down"

The "Send Shortcut to Specific Application" action would benefit greatly from an ability to "hold keys down" while the trigger is ongoing. In other words, if I set a keyboard- or mouse-based trigger (ex. middle-click on mouse), then the "Send Shortcut to Specific Application" action should send the "key down" events for the shortcut, and then ONLY send the "key up" events when the trigger stops (i.e. middle-click is released).

Yep we need this!

Still hoping this gets implemented!

Example use here: Temporarily unmute Zoom when the app is not focused.

yes, would love it!

It would be helpful for programming as well.
The german trigger for [ is to hold option+5. It would be nice to just click option and then 5. It is possible to do this with a sequence, but it would be nice to have the general possibility without writing sequences for every special character that might be used

That's actually the exact use case I want this for, too!

I'm not sure whether that is what you want, but the standard "Send shortcut" functionality has had this for a long time: 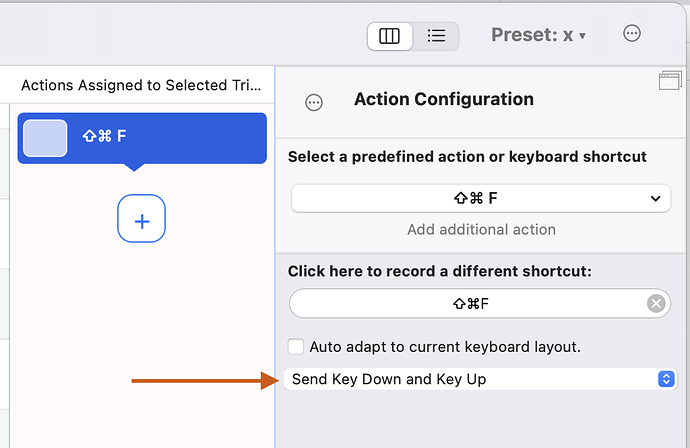 However modifier keys are very special that's why you'll need to use the predefined actions cmd/shift/ctrl/down/fn up/down if you want to only keep some modifier keys and not a real key pressed.

Unfortunately, this appears to be the opposite of what this thread is asking for. Here is an example of what is desired:

Step 1. User presses ⌘+⌥+Space and holds these keys down — this triggers the "send keys to application" action, sending a key-press sequence to Zoom (but only Key Down)

Step 2. after 30 seconds, the user is done, and releases the ⌘+⌥+Space keys — this trigger the "send keys to application" action, this time sending Key Up sequence.

Ah now I see. Unfortunately that would be really hard to fit into the BTT model because actions are separated from their trigger. Which is why I added the possibility to trigger different actions on key down and key up (or mouse down & mouse up)

Sounds good, then that will have to be the solution. The trigger-grouping feature of BTT at least makes that pretty easy to organize

We appreciate all the hard work you put into this project!

@Andreas_Hegenberg if I get you right, it is not possible to simulate to holde the option-key?!
For Windows there is a tool called https://www.autohotkey.com/
This tool allows you to press a key and it simulates that you hold the key as long as there will be pressed an other key. If you press Option it keeps the state keydown

That's possible you can use the predefined actions "Opt Key Down" & "Opt Key Up" for this.

Even after reading the documentation, i don't know how to do it. I always have to add a sequence like the ones i wrote:
option + 5 = [

Maybe i can't describe the use case

It would be helpful for programming as well. The german trigger for [ is to hold option+5. It would be nice to just click option and then 5. It is possible to do this with a sequence, but it would be nice to have the general possibility without writing sequences for every special character that might be used 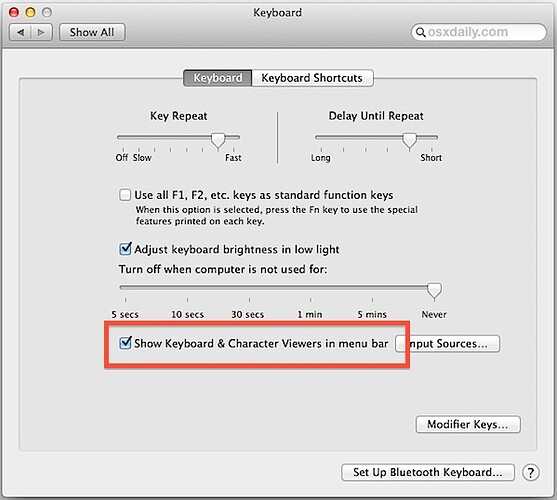 How to Enable & Use the Virtual Keyboard in Mac OS X

The Virtual Keyboard feature of Mac OS X is exactly what it sounds like, it’s a software-based keyboard that can be used as an auxiliary onscreen keyboard to type anything on a Mac. These vir…

The part A Helpful Modifier Key Trick for the Virtual Keyboard on Mac shows how to do it.
@FaeTheWolf maybe this is helpful for you

The part A Helpful Modifier Key Trick for the Virtual Keyboard on Mac shows how to do it.
@FaeTheWolf maybe this is helpful for you

I appreciate you bringing that option to my attention, however, the problem you describe (and therefore the solution) is very different from what i am trying to achieve. My goal is not what you describe: to hold down a modifier key for a period of time and then release it.

What I am looking for is an option to have a particular key (or key combination) simulate holding down a key for an arbitrarily long time, until that key combination is released. The problem is, currently there is no way for me to bind "Key-combo ____ down = send spacebar down to Zoom" and "Key-combo ____ up = send spacebar up to Zoom" (which is specifically what I want to do in this case). If I could set up such a shortcut, I could simulate a "push-to-talk" option using ANY key or key-combo on my keyboard, and I would be able to use that combo without having Zoom in the foreground.

First of all, hi all, my first message, even I've been using BTT for a long time, I even used it for my LeapMotion (I still have the version that supports it).

I think I'm writing in the right thread, because I guess I'm having a problem very similar to the one @FaeTheWolf described.

I'm using a MacMini as a mediacenter, and sometimes text can be really small in a Full HD screen at almost 3 meters (10 feet), and with a keyboard and the Accesibility/Zoom I can magnify it at will, zoom gets activated by pressing Ctrl+Option keys and deactivated when you release them, so I can keep it on as long as I need it.

But I found that a cordless, 2.4GHz mouse was pretty much enough to navigate through the options (Netflix, HBO, Prime, Kodi, etc.) and much less bulky than a keyboard, the only thing I missed was the zoom, so I tried to define that function with BTT in one of the mouse extra keys.

What I did was to define for that mouse key a "Normal mouse" button, "Trigger for mouse-down" one, that included "Ctrl Key Down" and "Option Key Down" predefined actions, and a second button for "Trigger for mouse-up" and the corresponding modifiers in Up position: it sometimes works, pressing down the button activates the zoom, releasing it deactivates it, but most of the times it doesn't and I have to press the button once to activate it and again to deactivate it. Or sometimes you press and does nothing, and a second press works, or a first press works and releasing the key does noting, you have to press again for it to work… I also found that that if you leave the mouse idle for some time, the first presses/releases do work, but if you try more times (and it happens frequently when reviewing different movies / tv shows) then the behaviour becomes erratical.

What I'm using right now is a shorcut "Command+Option+8" that does almost the same (but not quite, the other option lets me change the amount of zoom with the mouse scroll wheel while pressing the key, in that one I need to press an extra Ctrl key to do the same), activating zoom with one press, deactivating it with another one, but in a consistent way, it works always the same way, not erratically.

Of course, what I would like to have is a mouse key that does exactly what the keyboard can do, to activate zoom WHILE the key is pressed, and deactivate it when I release it. Is that possible in a consistent way? Why not an option that allows "modifiers/keys down when button down, then up when button up" in the same action?

Thanks in advance for your help.