I'm having the same problem. I have three monitors. Terminal-Window pops up on the main screen. If I want to move it to the left monitor I have to press the "move next" key twice because of this missing feature. It is also quite strange to move something two time to the right if you want to have it on the left side!

You can use the "Custom Move & Resize" action, e.g. this will center on the left screen: 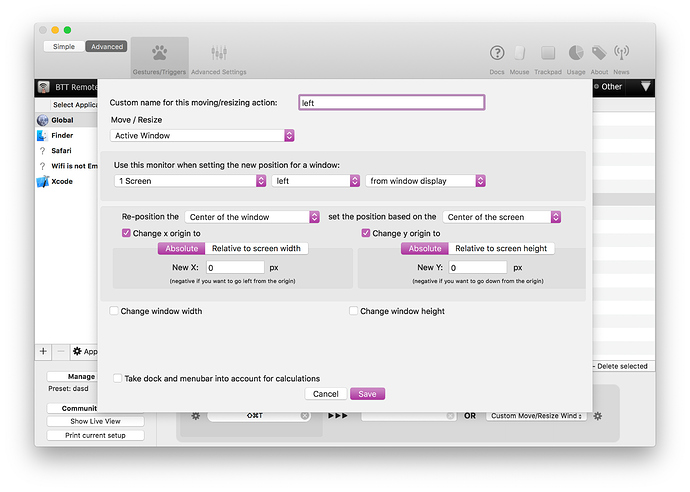 Thanks, but I was talking about "BetterSnap" Tool...

Ah. Unfortunately BetterSnapTool doesn't have such a feature currently - maybe it will be added in a future update. However if you'd like to, you can generate a free BetterTouchTool license if you have purchased BetterSnapTool. (Download the BTT trial from https://folivora.ai/downloads, then in the registration view select the "Get free license" option)

Looking for "Center Window on Previous Monitor" too.

I have 3 monitors. My laptop display and 2 external monitors.

I tried the suggested workaround, but this doesn't cycle through monitors like "Center Window on Next Monitor" as far as I can make it work.

I just want to be able to do that going the other way so I don't have to gesture twice to get a window to the farthest monitor from the one it's on currently.

Is that possible with "Custom Move/Resize"?

This doesn't seem to ever hit my laptop display. It only cycles between my two external displays.

Since I plug into various multi-monitor setups I would also love "move window to previous monitor", to compliment "move window to next monitor" (moving the window in the opposite direction).

I just figured this out how to sort of do this. The current version has an "x screens right/left" option, which works, but the windows are jumpy when combined with resize functions. It would be nice for "Previous monitor" move and maxmimize to be presets though, since they exist for "Next monitor".

Just want to bump this as well

would love to have a "move to previous monitor" option too!

Just renewed my license, thanks for making a great product @Andreas_Hegenberg!

Hi, I searched for the function too - but I kind of found a great workaround, yet it needs another app (which I love) Magnet.
Just assign then the trigger that you want to use (in my case, two finger swipes left or right on the magic mouse) to the shortcut you use in Magnet to move the window to a screen left or right.

Magnet costs only a few € and I used it a lot before BTT too. Maybe it can solve your multiple screen situation with Trackpads or others.