3 finger tap is often not recognised

Describe the bug
I have BTT configured for 3 finger tap as middle mouse click.
Often when I try to open a link into a new tab, I often have to repeat the gesture several times while placing my fingers on different locations on the trackpad.

I had used the "MiddleClick" freeware tool before which dealt with this just fine, so that this behaviour really reduces user experience for me.

Same here on a 2016 MBP with the latest High Sierra and BTT. Still evaluating the trial version, and this is the one thing hindering my decision to get the full version.

I've used three finger tap to middle click to open link in new window and four tap to close window very heavily with BTT for years - it was single-handedly (literally!) the reason I bought in to BTT.

These gestures were both totally reliable for me for years, then problematic for me for recent quarters. In today's world of auto-updating everything, I really can't pin when it went south or when it got better for me, but it has been. On the MBP I'm using to write this, even in Live Preview the 4 finger tap is recognized so rarely that I have it mapped to both that and double four finger tap just to increase the odds of it working. On my iMac with the old (non-lightning, AA) trackpad the 4 finger tap is just fine. So I do think there's a little more smoke here, even if not fire.

One thing I did do which did make things work more like I wanted was to be sure that the OS didn't hijack the triple tap.System Prefs->Trackpad->Point & Click -> Look up data detectors. Be sure that doesn't get the triple tap. If you're doing anything unnatural with tap vs. click, be sure the last option, Tap to Click, doesn't eat the Single Finger Tap. Whether it was tweaking those, various updates to the OS, apps, or BTT, or just the passing of time that's helped, I'll say only that this is better than it was recently, but not as solid as it was a year or so ago. Three and four finger taps just aren't solid.

In short (too late?): Long time BTT user, but first-time caller. As a developer myself, I get the "there's something funny going on...sometimes...on one of my computers but not the other" posts aren't terribly actionable. Between mapping double 4 tap and 4 tap to the same action and mentally training myself to expect it to still not work reliably, I sort of have a workable flow again. Even in live view with my four fingers as still as I can make them in consecutive taps, they just plain get lost sometimes.

I think this is probably a separate issue from the one outlined above, but maybe not...

I use BTT on a desktop system with a discrete Apple Wireless Magic Trackpad. I too have been noticing for a while that multi-finger gestures sometimes fail to be recognized.

However, I've recently realized that when this happens, my fingers are almost always near the left or right edge of the trackpad. Not actually on the edge, though; it's not close enough that I can feel the edge with a finger. And it's pretty much 100% reproducible: three-finger tap or four-finger click near an edge and it doesn't get recognized, do the same gesture a little further away from the edge and it does.

I initially thought, "well sure, the active area of the trackpad is probably smaller than the physical extent of the device." But that doesn't seem to be the case. Regular pointing (mouse cursor) works fine even with a finger dangling half off the edge of the trackpad.

There don't seem to be any preference settings that are directly related to this, but through experimentation I've discovered that turning off Trackpad -> Palm & Thumb Recognition -> Thumb/Palm Handling seems to resolve the issue and allow these gestures to be recognized at the edge of the trackpad. But I haven't used BTT long enough with that setting turned off to see if it causes other problems.

Additional background: I don't intentionally hang out at the side of the trackpad. It's just that the positions of the keyboard, trackpad, palm rest (separate gel pad in front of the trackpad), and chair shift over time as I work. As long as I feel the trackpad surface under my fingers without feeling an edge, there's really no way to know exactly where I am on the pad without looking. The positioning just seems to drift on its own by an inch or so either way.

I am having the same problem: 3-finger swipes and taps are only recognized when the fingers are close to horizontal. I'm having this issue on 2.687 with both my 2015 MacBook and 2018 MacBook Pro.

I tapped like million times, triangular shape or the other one does not matter. Three finger tap top and three finger tap bottom is not working in the version 3.178

Seems to work fine here. What kind of actions do you have assigned? Are you sure you don't have a normal 3 finger tap set up? (that will always override bottom/top taps)

Also make sure to not have any other fingers touching the trackpad, this can sometimes be tricky on the large trackpads of some Macbooks.

The three finger tap also doesn't care at all about your finger positions but you can change required pressure/timing here: 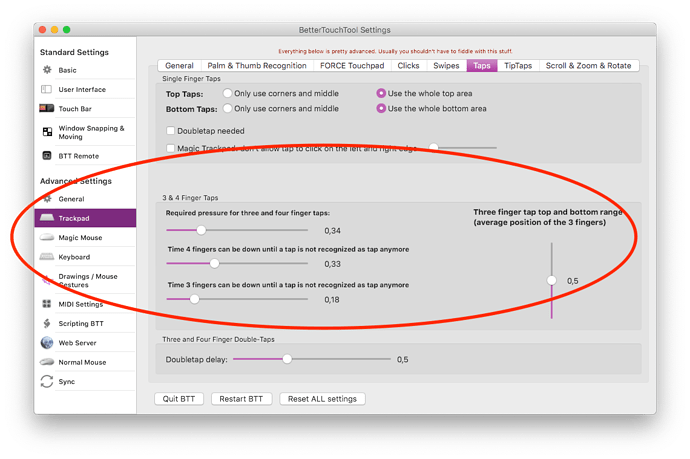 One thing that will mess up three finger taps is the Accessibility setting "Three Finger Dragging" (System Preferences => Accessibility => Trackpad. BTT can't work well with that because it changes some fundamental behaviors of the trackpad. If you need to use this, try to set this to "optimize for three finger drag": 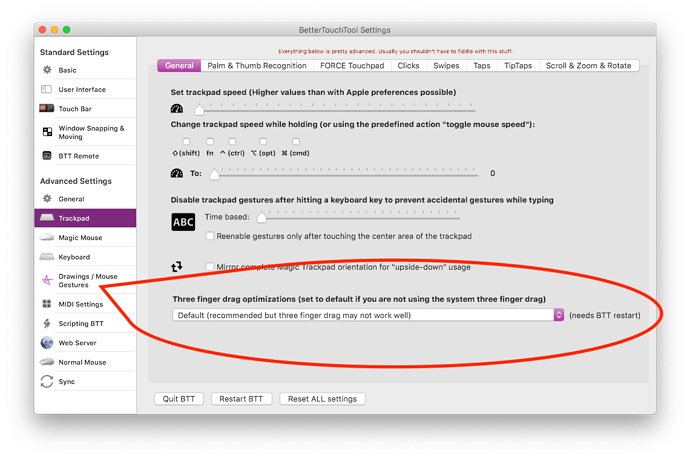 Are you sure you don't have a normal 3 finger tap set up? (that will always override bottom/top taps)

This is confusing...There must be some sort of hint inside your software.... Please tell me what are the other gestures that override each other ?

good to know. Thank you!