I don't use Apple Music, but I do use spotify, so I set the pause/play button "F8" key (on newer M1 Pro and M1 Max Macbook Pros) to launch Spotify instead of Apple Music. It works great, but then the play/pause button doesn't work anymore for playing and pausing inside of spotify.

What additional action can I add to get back this functionality? The current default I have now tries to launch spotify every time even if the application is open. How can I make this better? Thanks 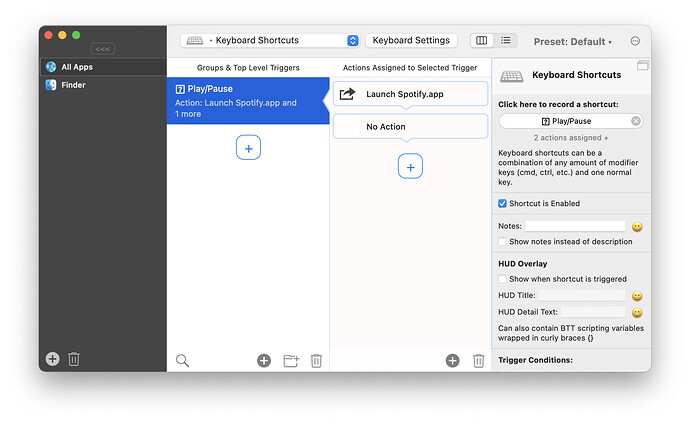 Maybe you can create a conditional activation group that checks whether spotify is running - and only have the play / pause button configured if it's not already running: 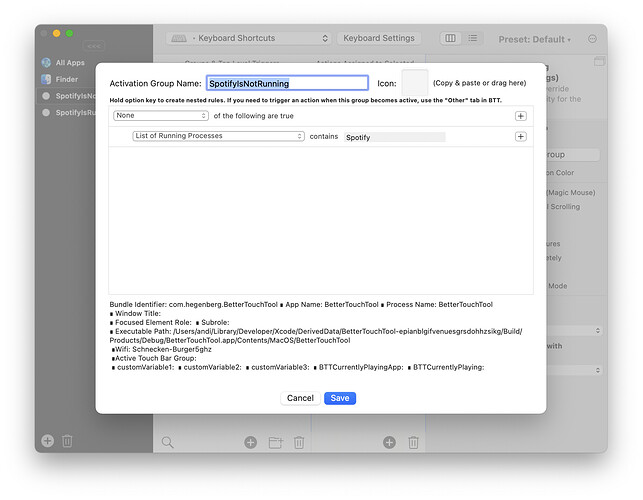 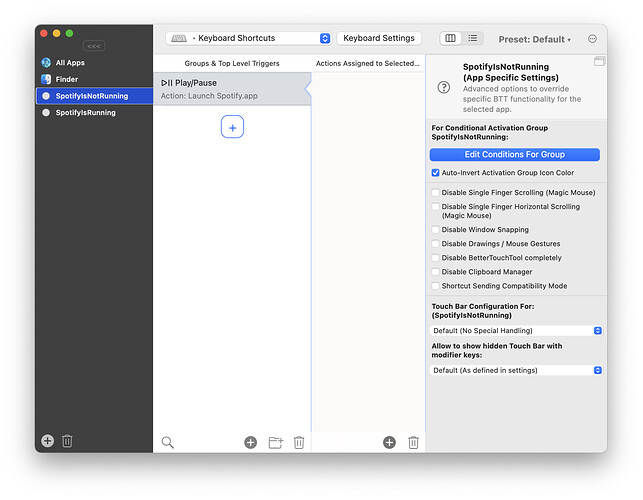 Unfortunately, No. This is not working. Now it launches Apple Music by default again.

It’s working fine here, could you post a screenshot of your activation group? 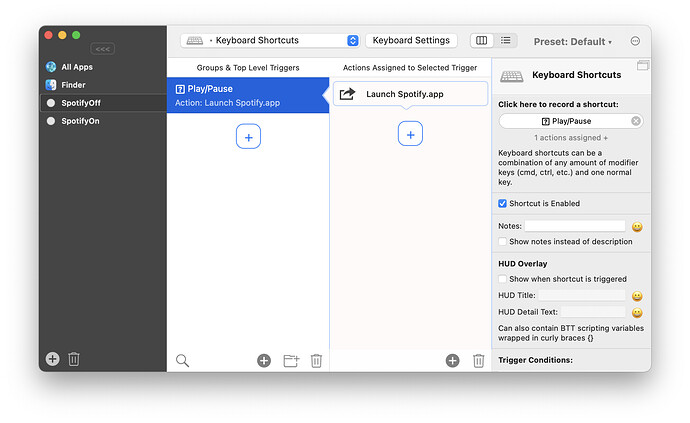 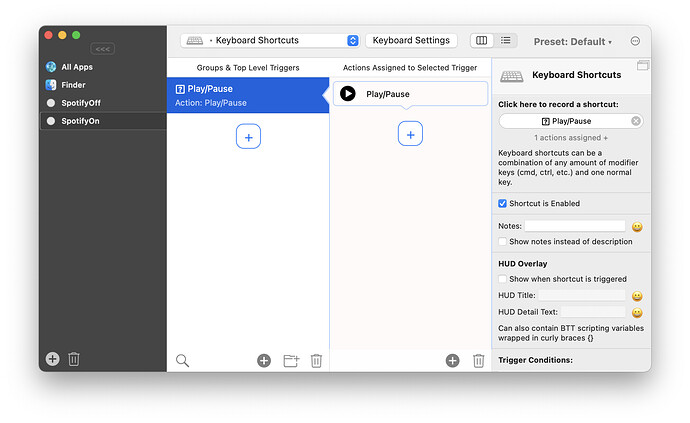 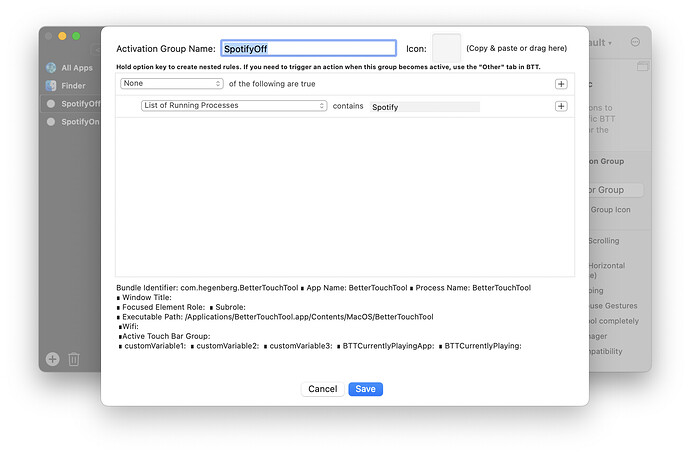 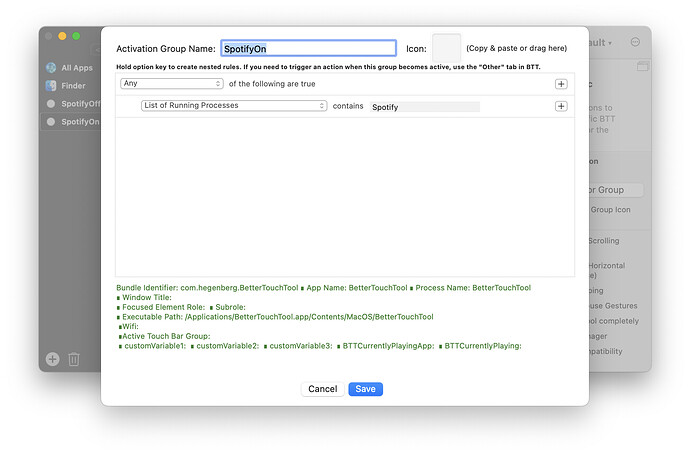 When "spotify is on" I made the other group to go back to pause/play functionality, but if spotify is closed, before this tool can catch it (and launch spotify) it launches Apple Music by default.

With both groups enabled nothing happens when I click the play button. With just one, launch spotify enabled, it launches spotify, but then the pause play function does not work. With just the pause play function enabled, it launches Apple Music even if spotify is already open, and does not pause or play. So basically, the "Pause/Play" command inside of BetterTouchTool just launches apple music if routed to that.

you don’t need the spotifyon group, that setup would just cause an endless recursion where the play button triggers itself. However Spotify only reacts to the play button after it has been launched AND you have started at least one song manually. I think this is designed like this by spotify

Thanks that helps, but actually now it's just a gamble whether spotify launches or apple music. I'm hoping someone will tell me how to disable apple music launching on the Apple forums (ehhh).

weird, BTT should detect that spotify is not open anymore latest 5 seconds after it has closed.

Yes, I guess these Mac's are so fast to open Apple Music that sometimes it opens Spotfiy and Apple Music at the same time

That should not be possible - maybe a bug in BTT. I'll try to reproduce this!

Could you try one more thing: add an additional config for the play button, but this time set it to "Trigger on Key Up" and don't assign any action: 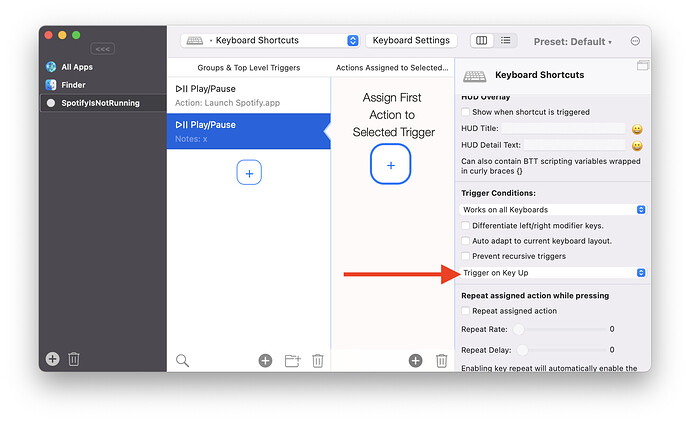 I think I have found a solution.

Keep your SpotifyOff group like it is, but additionally add the SpotifyOn group again. Then configure the play pause button for that group to send the space key to spotify using the "Send shortcut to specific app" action. Space is used in Spotify for play/pause. 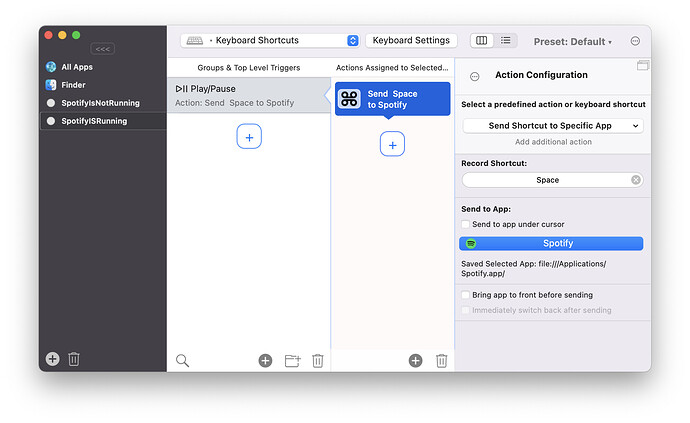 Hi @ProjectileObjects @Andreas_Hegenberg , don't know if you are still experiencing this issue, but i've solved it.

Hope this helps! Took me a couple of hours to figure out 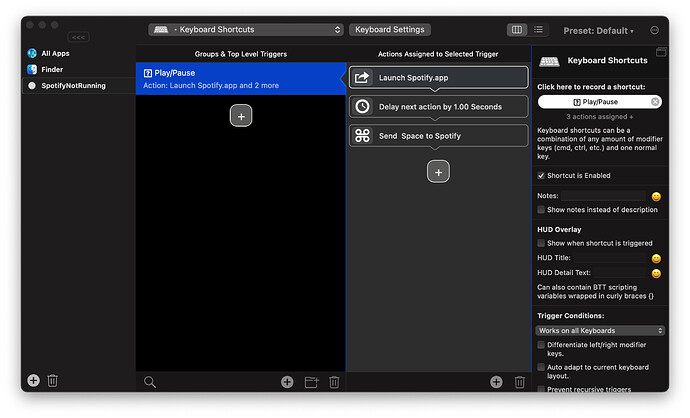 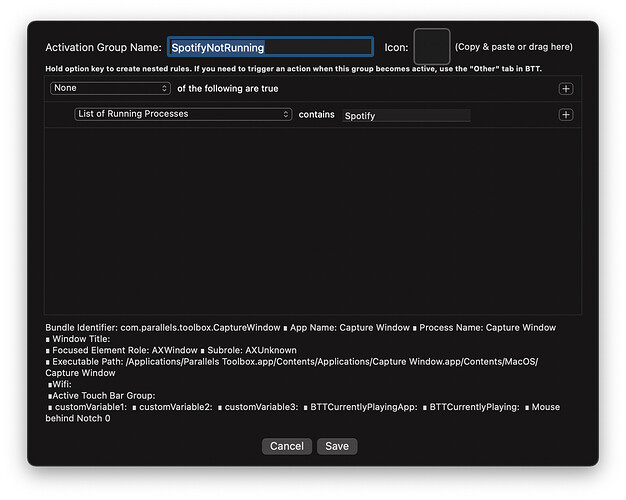