I'm waited this moment for a while

Let me say what I discovered in few minutes man!

Is it normal Esc button animation is cutted when you press it?

This evening I'll wipe my mac to update it to mojave, so I'll try your preset again!!

P.S. Thank you so much for your hard work @yuuiko If I'm using touchbar after a while is only thank to you

Thanks for your quick reply!

Oopsie! Thanks a lot for your explanation @yuuiko!

3b) Do u think it's a good idea to apply aptic feedback when you raise up and down volume/brightness? .. Sometimes when you're at uni/work/etc.. it sounds a little bit annoying ... Do you agree with me?

Another Thing I’d like to ask:
Do you think that the Controls view (the switches) and the Apps view are a bit too cramped/messy? I don’t want to remove any toggles but I also don’t want to add an additional switch (like the current, old AQT) as it would be annoying to always switch them.

Any ideas or is the current the best we can think of?

First of all it's not annoying to switch from one to another toggle and the apps view is not messy (at the first I had few doubts about it but yeah, now it's a loooot better compared to the previous Aqua releases because everything you need is there on the right and it's more stable and intuitive!).

Yep, I do agree. Starting to feel it's annoyances.

With the "Cramped and Messy" issue, i was talking about:

These views have a lot going on compared to the other views.

Do you think that the Controls view (the switches) and the Apps view are a bit too cramped/messy? I don’t want to remove any toggles but I also don’t want to add an additional switch (like the current, old AQT) as it would be annoying to always switch them.

No man! In my opinion it's ok because yeah, although it seems to be a little bit messy, in only 4 button you have EVERYTHING and they're organized in a really good way!

P.S. Keep going straight ahead because this new release that is as static as still allows for app-specific controls it's a masterpiece, so I hope I can try new releases very soon!!

Oh, I don't think this is very static anymore as before, the currently open app icon shows for the current app which you could open it's controls.

Manually opening the app = stating, not dynamic. That design changed to this, so I won't be doing that anymore.

But I do agree now there's something static to anchor on and always be there for you to use. I think that's the main reason why i'm not competing with other "static, unchanging for every app" presets - The widget view was too confusing and change-ey to operate.

Since the calendar / reminder events are no longer on the main container, I've made a small tweak to the calendar button on the right side to become red when an event/reminder is detected, to let the user tap in to view those events/reminders.

This is what it looks like when a reminder is detected:

Thanks for your support! I'd been meaning to do exactly the same but was unsure how I would code it.

I'm having trouble importing it into BTT though, It's not accepting my "Paste JSON from Clipboard".
Could you try send it separately as an exported preset? I'd like to merge this into the official release!

Yea, the markdown is screwing with the code. I've pasted the JSON into pastebin, it should work now.

Just merged and works great!
I’ve credited and linked you within the code.

It does make the control strip a bit asymetrical, and kind of disjointed though. I like how it looks like “one big button” when idle, like currently.

The meaning of the colouring is also a bit confusing, so what I’ll do is i’ll make it an option in AQT’s settings (coming soon), defaulted off.

No problem. To fix your issue, you can also invert the colors like so:

the color code I used was #BC3A3D

Yes, I have it set as this, but the color imbalance still bugs me out. (i'm also using a lighter color). It just, looks weird and stands out a bit too much. I can't seem to find the perfect red that is subtle and not eye catching, doesn't look like time is in danger and blends into the other, grey buttons..

This is what people will see when they enable the highlighting in the control strip if they wish so: 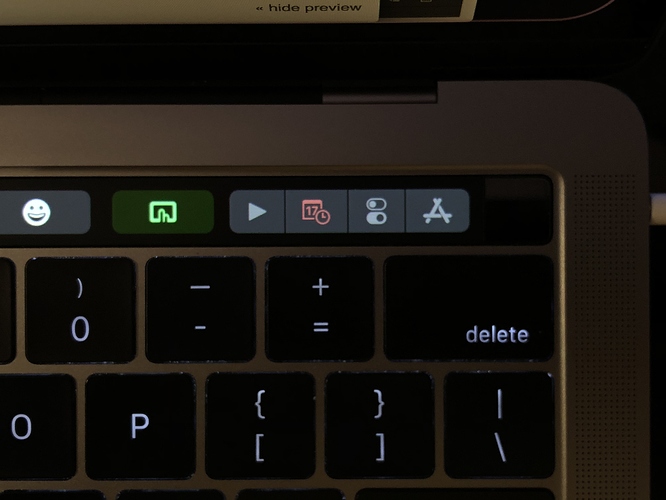 Hi! I am loving this customised touch bar. There are a few things that I am trying to figure out how to remove since I do not find necessary.
There are 2 things that so far are bugged to me:

When on quick menu, the Spotify widget keeps flashing at an interval the whole time. I can't make it stay. It disappears and reappears. I changed the 'execute ever X time' value and It would keep flashing, just at a different interval.

The same happens with the night mode widget. It keeps appearing and reappearing and it messes everything up because when it disappears it gives space for the rest of the widgets and then they move and if I try to hit a key then I end upo hitting something else.

When on game mode, no icons are showed. So fan speeds, GPU, etc don't appear. Only the 'eject all' is visible if I ticked it. But otherwise only the escape button is visible.
I tried installing the iStats thing but I don't know how to. There is no instructions on how to install it. maybe that is why those widgets don't show?

Also, will I mess things up if I get rid of some actions/widgets that are to me unnesecary?

Also if I hold press tab and click 'game mode' the whole thing disappears and gets erased out of BBT!! all changes that had been done also disappear

These bugs never happen to me ... Have you installed both presets? (basic and game plugin). Have you tried to remove and install it again? (maybe unchecking other presets if you have them)

@German_Matviuk,
Could you tell me your BTT verison, AquaTouch version and MacOS Version?
These are pretty bizzare bugs you have there.

In the meantime, to make your preset at least usable, try uncheck all Now Playing widgets, and replace it with a "NowPlaying Widget" from BTT. Set it up near one of my media widgets. It won't stack for each app like mine but it would be a lot more compatible. 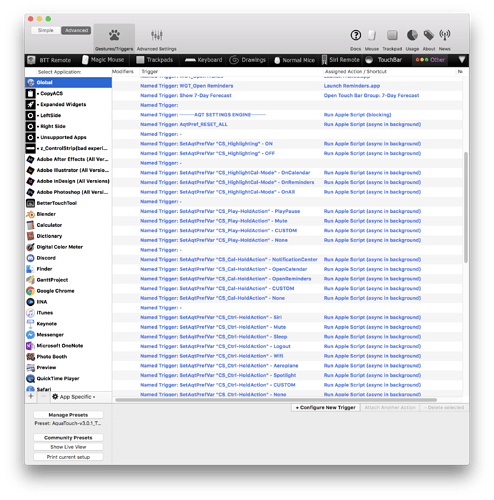 As i'm developing, Not really. *so much variables*

This may not be available for the next release since implementation is a long process and it may increase battery drain, but I can't tell unless I see...

Edit: Looking at it again, I think a settings UI may be too much to implement, may increase battery drain and isn't as customisable as editing triggers yourself.

My original idea which you can see is being setup in the screenshot was a Settings Window where you could flick what you want on, but it will have limited options. I was going to have a CUSTOM option there which redirected you to change some named triggers, but now I'm looking back at it I think maybe just making a help document about changing the triggers will suffice. I'll experiment...

I have both installed. I have tried both and also unchecked them. I also have version 2 and 3. It happens on both version. I have reseted BTT several times, and installed and reinstalled the presets around 3 to 4 times now.

my BTT version as said are both 2_2_1 and 3. Currently using v3 but still not working. All bugs repeated themselves on both versions. I am running Mojave.
Last time I checked, the now playing widgets would not work anymore. Just as if I had them unchecked...
I also unchecked them now too, what did you mean with replace with a now playing widget from BBT?

Another bug I found while playing League of Legends is that whenever the plugins are running, my mouse gets buggy. Basically the only moment where it bugs is when I hold click and drag. The mouse pointer suddenly jerks around and get stuck somewhere near the top of the screen. If I keep dragging it does move but then it jumps back to the top of the screen.
As soon as I closed BTT the bug disappeared.