It looks good. I don't want to sound harsh but with no updates released for 7 months, losing interest in waiting for this and starting to look for alternatives.

Any idea when you will release an update or should we start looking elsewhere?

The next version should come soon as most of the changes I wanted to make are done. All that's left my mind right now is to get the manual done!

The plan is to get this update fully complete and ironed out, getting rid of junk, incomplete widgets and triggers, making things work smoother and other things all so that I can remove the 'in construction beta' state and into a 'complete and in active development' state. So i'm really looking out for thing that don't work well and to make things run smooth.

Additionally I'm pretty busy right now with my last year of school, so updates are slow as this isn't my highest priority.

Is a reason you're waiting so eagerly? Is something missing from AQT you feel I need to add?
EDIT: You said 7 months, are you aware that there was an update about two months ago? maybe check that out

Anyway, here's the changelog so far so you can see what I've been up to:

Asking because I want to get the Outlook ones up to date, because the one that is there now isn't the same as the one I submitted (bar switches by mode - inbox, calendar, contacts, etc) and I also have other ones I want to finalise that are on hold until you release the update.

Most smaller open source projects release more frequently in beta to allow more testing and contributions to be made instead of longer release schedules like the bigger ones.

7 months was based on the download on this list (first post). I have downloaded the one from 2 months ago, but there seems to be lots of changes that are in limbo in this version.

Noticed one other minor bug: The "Control Button" hold action is wired up to the Calendar hold action. I switched this configuration from "Calendar" to "Control" in RN2 Control Strip > ControlMode > Advanced Configuration and it worked as expected: 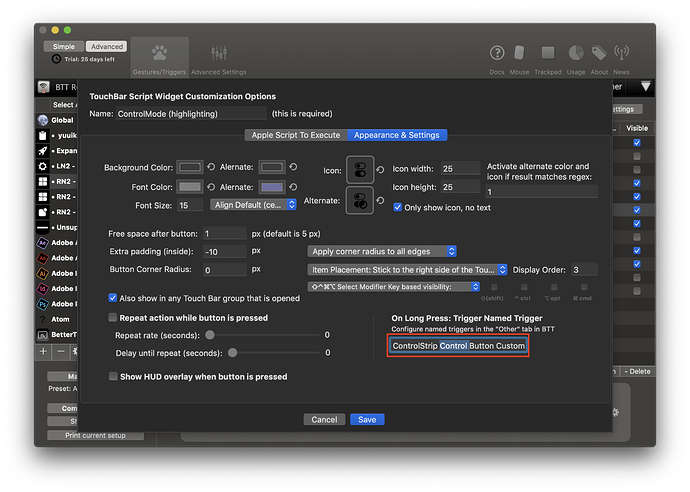 I think the current one does have the mode and automatically switches too, do you see this one:

As with the slow release rate, this is because I'm working on my graduating year, this also combined with, how I'm the only one working on this. I also have a standard of quality and I'd like to avoid releasing half-complete and buggy releases for the public to evaluate even if I already know the issues.

I do agree with your point on user contribution though, so I'll try to segment my updates a bit more to increase the release rate. Thanks for your feedback!

If you'd like to suggest anything or see something missing you're still free to suggest and i'll put it into my list, I appreciate that you're waiting for the next release to suggest though, thanks so much for your patience!

Thanks! Must be residual from when I made it a color-changing icon from the code of the calendar one.

Hi, I'm a longtime BTT user, but very new to AquaTouch. Is there a way to swap out the Calendar option for Fantastical on the right side of the TouchBar interface? I use Fantastical as my main calendar so it'd be amazing if there was an easy way to make it replace the default Calendar there.

You can customise the hold action of the QuickStrip buttons in the 'other triggers'. I assume you know how to do this since you say you're a long time BTT user.

As with the schedule widgets, They require a bit more coding to get working with fantastical. I think @GoldenChaos has something working in that area, I'll take a look and ask if I find anything.

I see that one, but the touchbar only shows up in mail mode. In any of the other 4 modes on the left, the bar becomes blank.

Interesting. It seems to be working fine on my side and I don’t remember changing anything.

Could you please send me a copy of one that works and the one that doesn’t? It’ll help me work this issue out

Thanks for the reply! I was able to change the QuickStrip button very easily. I hope support for Fantastical gets added soon, but overall this is such an amazing addition to the TouchBar.

I removed the preset and installed it again, and now everything is working correctly

Hello! First post and new to all of this. Thanks for making AQT! I had a couple of questions.

I'm also running into certain issues where I would have to restart BTT completely. One is when I switch to the AQT touch bar, the right control strip does not show up. Another issue is when the AQT touch bar gets stuck, say when I am using Google Chrome and I click to Finder, the touch bar does not change to my Finder settings.

And one more thing, for Caprine the "Like" script does not work. I have tried to configure it myself, but I could not figure it out either.

I have made little changes in the settings, but nothing that affects functionality.

I echo the question about persisting AQT. For me it always collapses and reverts to the macOS default. I assume that's not intended, unless my time with GoldenChaos has given me the wrong expectations?

Thanks for using AQT!

AQT reverting to default after some idle time
Not sure about this one... I haven't had it happen to me, and there shouldn't be anything that triggers it automatically apart from app switching. What app and other scenarios did you notice this happening? The specific view / group would be a good start I guess. Is it an extension or full set? is this happening on any app? How long is the idle time?

Restarting BTT
I'm having minor hassles with this too, though I'm not keeping track of the specific issues as I guess i've just been treating them as BTT bugs. I'll keep track of them more now. I don't have the disappearing Control Strip bug though, it appears everywhere quite stably for me. App switching doesn't have much issues too. Could you give me a bit more context as to what AQT was showing, screenshots and specifically what happened while you do things (such as switching apps)?

I'm not aware of what could cause these issues, they seem pretty new and weird to me, hope we can find them out.
Are you running the latest BTT? If not then maybe try updating it. Non-english systems may be buggy too as AQT references english menus, but I don't think that is related to hide/show touchbar and the control strip.

This is quite common for AQT and is intended behaviour in most cases. 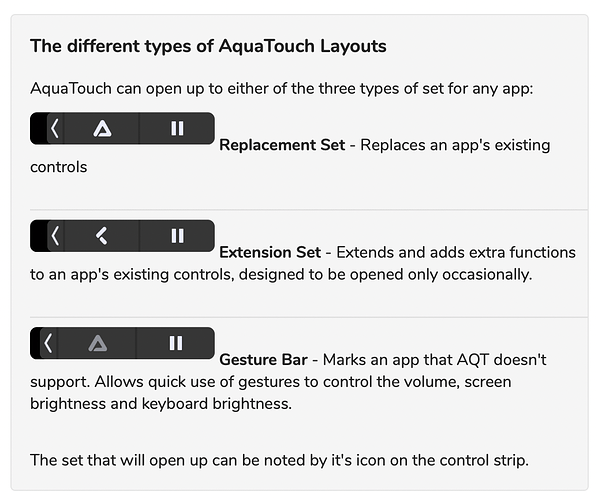 Because AQT is a semi-contextual, touchbar extension preset, it closes automatically for unsupported and half supported (extension set) apps to allow native touchbar UI use. Is it collapsing on a replacement (full) set?

On the other hand GC is a static, full replacement set. It's not contextual and is made to always show the main UI for everything.

Thanks very much for the quick clarification and apologies for my basic understanding!

The issue for me has been that AQT appears in Gesture Bar mode more often than I expected, but I see now that quite a few of the main apps I'm using aren't supported yet, so it's fair enough.

This is just an example from Finder. I modified it just slightly and added some app shortcuts, but between the two pictures the Gesture Bar sometimes disappears, and I have to restart BTT completely. I saw this happening pretty normally in Finder and Chrome. In order for me to use gestures such as two-finger swipe using chrome, I have to toggle the AQT touchbar.

@yuuiko
It does not cover album art.

@flufah
Could you send me your version of the preset? Your changes might have disrupted something...

Chrome and Finder was it?