Don't know if defect is BTT or AT but getting a line and <CS_ExpandFakeControlStrip items on TouchBar. 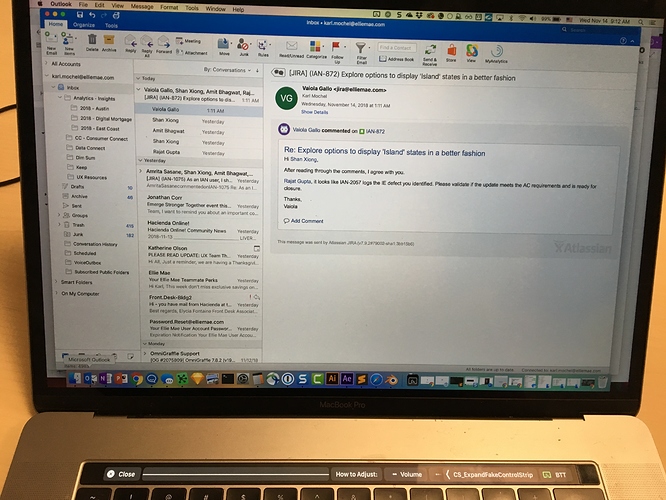 Thanks for your reply! I guess I did assume some, so I’m sorry about that.

It's rare that a conversation about the scene will go "the X/Y axis". You would talk with coworkers and clients about how the front of the scene looks or the top and bottom.

Good point. Pretty convinced that word labels would work now, It’s on my mind now to add it as a default and make a preference to switch to axes. Thanks for your feedback!

Don't know if defect is BTT or AT but getting a line and <CS_ExpandFakeControlStrip items on TouchBar.

Looks like a both defect, but more on the BTT side...
It’s showing all the right things (outlook is “not supported” so it’s showing the gesture bar), but it’s meant to show them without labels. That’s weird. I think I’ve seen another user report this but didn’t get back to me. Would you mind helping me fix it up?

If you’re in:
I’d like a screenshot of the Global+Unsupported Apps section of AQT, and also the advanced configuration of the close button. I’m looking to check if the “Icon Only” checkbox is on for this.

Additionally I would like to see some other “Visible” triggers to check their parameters. 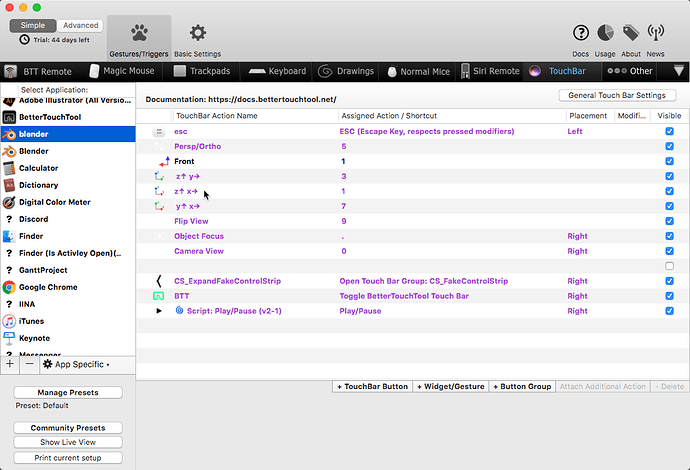 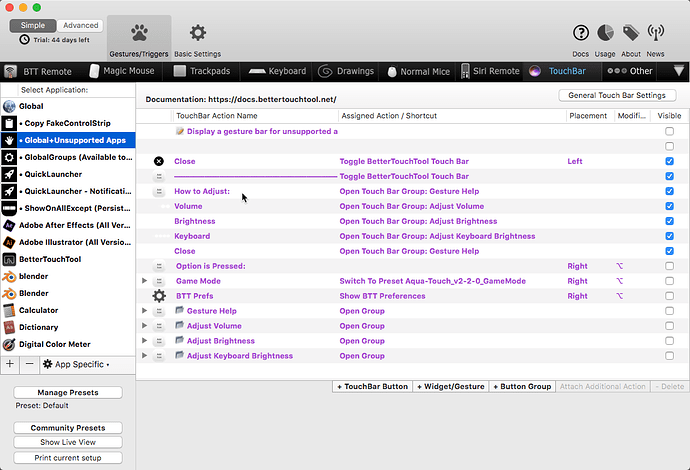 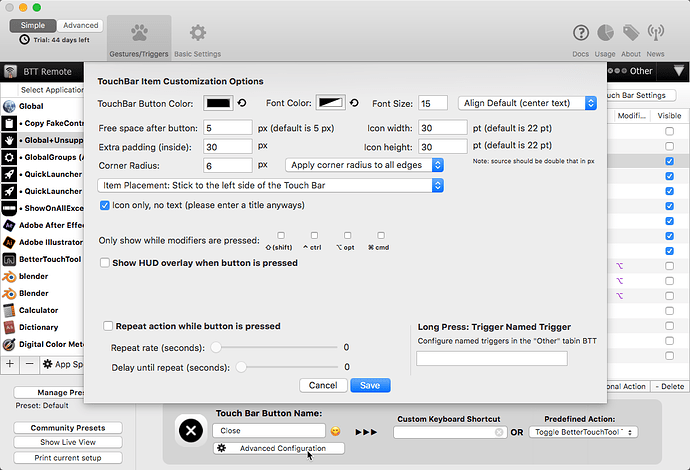 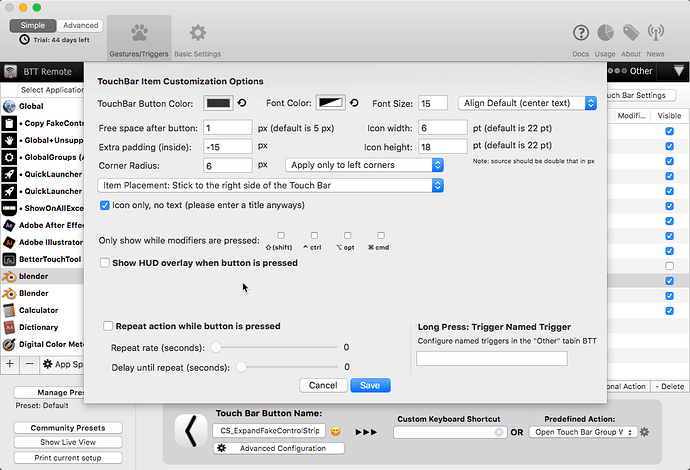 @kalmdown It's just not added to the exception list for unsupported apps. If you right click unsupported apps then go into edit conditional activation group. from there you just need to add blender with a small "b" to that list or change the current one.

Ah, you've added another blender with a small b.

Yes, as Luas_McDonald mentioned, for every app you add you need to exclude it from the unsupported apps.

I'm having trouble with screenshot uploads, so in the mean time here are worded instructions:

Here we are with another update! I've just been tweaking around whenever an idea popped into my head and I don't remember all of them, but here are all the changes I could remember.

NOTE: You must be familiar with Aqua-Touch before you use this. The setup process is still not updated fully to help you through setup, so you should use v2 for a while if you haven't used it before.

I think I added Telegram Support

Simple, Simple implementation of preferences allow you to change:

Safari Widgets - Touch Bar for Websites!
If one of the supported sites are open, you'll see an extra button in the safari touch bar.

Right click the green window button to bring up window snapping
Thanks to @panda's "Visual Window Snapping" preset edited by @Jerosh!
You've been quoted within the code. Permission pending though, so it may be removed if upon request. 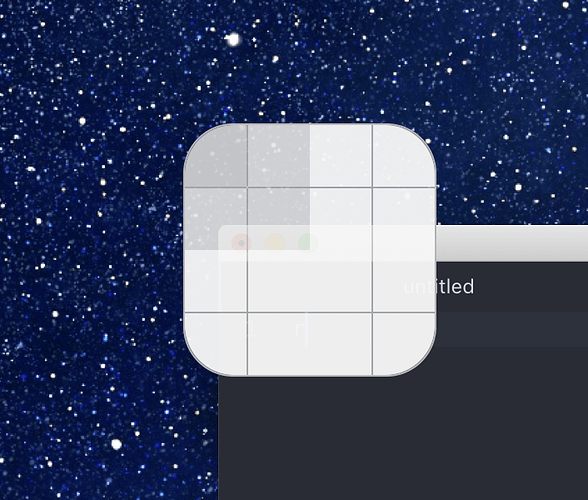 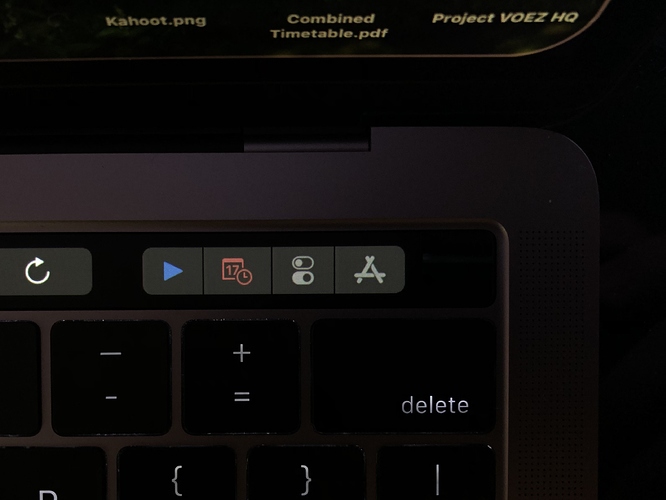 * You may see some work-in-progress things here and there.
* Help windows have not been updated for the new features of AQT3. You might be left confused about some features with no tips.

(@Dom)
The changelog didn't seem exciting enough so I added a heap of images just then.

No version update, just a more hyped up changelog. I also added a few points but again it's just to the changelog and they are already in AQT b3.0.1

@kalmdown, I've just looked through your screenshots (sorry, missed them) and they oddly seem set properly.
I do however observe that it's all purple. Try heading to the preset pallete and setting AQT as the master preset! 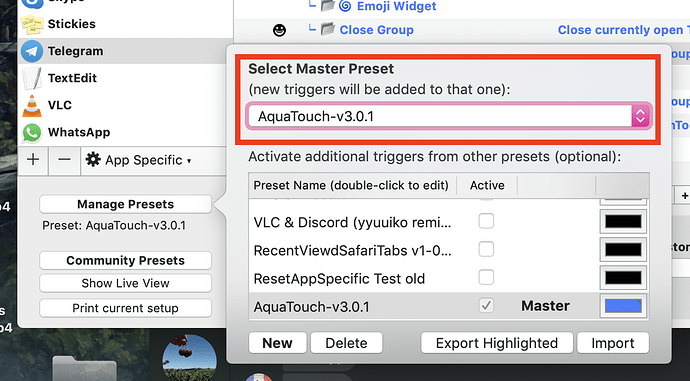 Hei man! How are you? I've tested AT b3.0.1 from yesterday and here it's what i've discovered!

It's been 1-2 months about since I'm using Aqua touch 3 and for the first time my touchbar it's really useful. At the moment I think the best thing you could do it's to make it more stable because it has everything you need to use your mac at the best you can. Maybe could you add more app support, more safari widget support ... But yeah, these are other stuff to add after that it's so stable to be used from everyone. Cheers

Thanks so much for your feedback @Dom!

I really enjoy your help and feedback!

Priority for b3.0.2 would probably be:
• Stability improvements,
• continue removing old AQT elements
• working on the preferences

Yay! Thanks for the help, now point 1) and 2) work flawlessly too

In b3.0.2 you can improve a little bit finder app interface: there's only "new file", and you can also add "new folder"!!

At the moment the worst annoying bug it's when your preset sometimes disappears but we already know it's a BTT app problem :\ ... 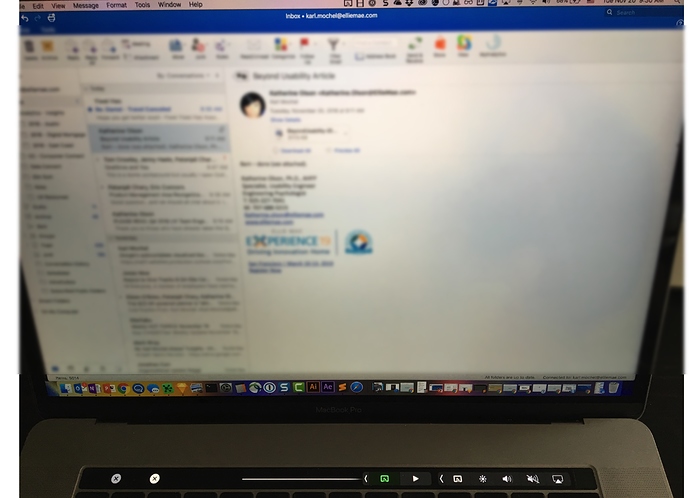