TouchBar Triggers with Modifier Issue, if BTT bar is closed.

Describe the bug
Pressing a modifier key to show a modifier TouchBar Button doesn't work while the BTT bar is closed.

It works for the first time, but after closing the BTT bar again, then trying again it doesn't work.

Are you closing it using the macOS X button?
Unfortunately BTT gets no notification if that is pressed, thus can't react to it and still thinks the bar is visible.

No, The problem is that this desired behaviour is not reached:

When the BTT bar is closed, and I press command,
it should open the bar and show the command triggers.

When I release command, it should close the bar and show the MacOS controls again.

It works sometimes, but only once.

You can try running this command while BTT is closed:

Maybe we once enabled this flag to test something? (Although I don't remember posting that publicly :-D) 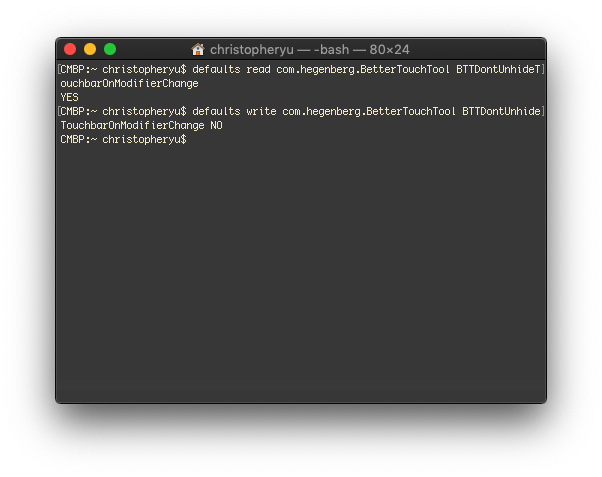 Seems to be working well with 'NO'

Maybe set that as default?

p.s. did you see my new icon pack at the new UI thread?

No is the default

Maybe some previous experimenting changed that , but I'll double-check.

Yes! I integrated the touch bar placement icons, they look good! I can't use the button images though because buttons are rendered in code

(code buttonns :s yeah I could tell, but they really need refinement! the + is kinda off-centre and the square is a bit off. I think changing them to image buttons would be better in the long run but well, go at your own pace

I'll probably do the device icons next based on their emojis)

Yup, I'm currently migrating all the various old settings to the new UI technologies. After that is done (in a few hours) all the basic things are complete. Then there will probably be a first public preview release followed by many refinements based on new and existing feedback

Device icons are a lot of work! Not sure if it's worth it to recreate them, but feel free to