I would like to "simulate" a shortcut with these predefined actions. Eg cmd+opt+crl+letter 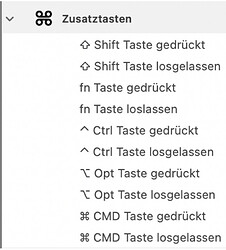 The modifiers are down and held. I verify this with a red button in the notch bar.

But now if I press the letter, nothing happens. However, the shortcut works when I activate it manually.

@Andreas_Hegenberg Could you please have a look at this? Would be nice, thank you!

I think I don't fully understand, what exactly are you trying to do?

The goal is eg to press and hold the modifier cmd+opt+ctrl with a shortcut (eg. cmd + e).

Once the modifiers are down I only need to press eg the letter "a" to get the combination (shortcut) cmd+opt+ctrl+a.

But unfortunately this does not work. But the shortcut works when I trigger it manually (normally).

The long red bar is just a button in the notch bar that only appears when these modifiers are down. This is just a visual indicator so I don't forget to set the modifiers back to "up".

At the end I want to set up a "cycle" action. Eg. Using the example from above

If you could combine all modifiers (including fn), you would have a "super hyperkey"