Hello,
I upgraded to Catalina, fresh install. I have been a 2yr license owner, as well, which has recently expired. I upgraded to v3.x of BTT and had intermittent success with window snapping running in trial mode. Today I saw and downloaded the 3.206 update which presents a new splash screen about Screen Recording. While I appreciate the disclaimer that BTT won't record the screen in the case of typical use unless explicitly requested, how can I know if the screen is being recorded. I have sensitive information on my computer and cannot allow such a risk. Snapping and window focus via BTT is now a fundamental part of my workflow and would hate to lose it. I appreciate that the new OS has made a lot of changes regarding security, but what other indications can I use to validate the claim. 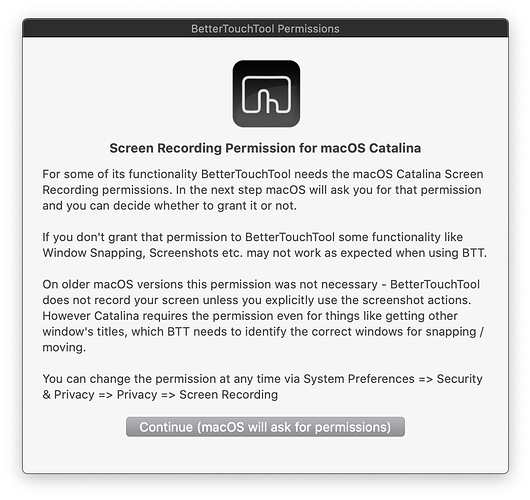 Thanks for understanding. I mean no distrust.
regards.

That's just a misleading permission name/group Apple picked imho. Dells DisplayLink drivers (USB Hub) also require thise permission in Catalina, and there was no software update for it. Meaning that if they record my screen name, they'd have to have code for that before the update to Catalina... And I'm pretty sure that USB drivers does not record your screen, neither does BTT

Thanks, Worie, for the reassurance. Can any developer comment on Apple’s use of this security area? It would be nice to know how Apple officially defines Screen Recording.

unfortunately the permissions on Catalina are super stupid, there is barely any documentation and the wording is just bad ;-(

In BTT there are basically two areas where the new screen recording permission is necessary:

In most cases the snapping will also work without the permission, it’s only necessary for die problematic apps.

In general note that before 10.15 every app could record your screen at any time, also be aware that the Accessibility permission is much more powerful because it also allows BTT to read all content on the screen. For apps like BTT you basically need to trust the developer - but it’s always a good idea to install a firewall like little snitch.

Thanks for your superlative explanation. Regarding the firewall, I do have Little Snitch, but there is an issue here too: don't I need to trust requests to the developer IP for updates and doesn't this defeat the point? I didn't know that before Catalina there was this risk about screen recording - wow!

Do you know if there is any visual cue from the system when a screen recording is taking place? This would assuage my fears. With the built in screen recording there is menu bar item, but does it also happen when another app 'records'?

That would have been great but unfortunately there is absolutely no indication.

You are right about updates etc. but if you are worried you can block everything and download updates manually. Every developer I know complains about the new permission system because it is super intransparent for users (and devs), so if possible please let Apple know this should be improved. The current state of permissions on Catalina reminds a lot of the Vista disaster Microsoft had

Thanks. I will, in a completely useless exercise, write to apple to complain. All the non App Store apps on my system are driving me crazy with requests that make no sense... I feel I am reasonably sophisticated regarding all aspects of my Mac, as a user since 1995, at least on a GUI level with some terminal and networking knowledge, and these new permissions are driving me to the brink. Sigh...

yes, the only thing these permission popups teach users is to not read them anymore and just click ok. What apple is doing goes against all research that has been done in this area for the last decade...

I seem to recall that even Bartender had to ask for "Screen Recording" permissions -- and all it does is move icons on the menu bar.

If you want an independent tool for downloading BTT updates, I have a shell script that will do just that.

(In fact, I have a whole series of them. I run them automatically overnight so I don't get interrupted for app updates, and so all of my Macs get updated without me having to manually intervene.)

It will download the update and save the release notes in a text file in the ~/Downloads/ folder along with it.

Yep Bartender faces similar confusing permission issues - however at least technically they record parts of the screen (the menubar). BTT doesn't do something like that unless the screenshot actions are used.

I know it was a vastly-overused sentiment a few years ago, but when it comes to the way the user experience has degraded on the Mac in Mojave and now Catalina, I do think it's reasonable to wonder whether this would have happened if Jobs was still alive. I didn't know him, of course, but it's hard to imagine him signing off on all this poorly-implemented, user-hostile “security” features of questionable practical value.

If he saw that "first-run, post Catalina upgrade" screenshot that was making the rounds the other day, I think he might have put someone through a window at Apple Park.

Would it be possible that you could got your problem solved by using a screen recorder for Mac? Generally speaking, a third-party program works more professionally.