I was going to backup my presets and all of a sudden I have now three presets instead of one. And all three presets have the same name but any of these presets contains different triggers and actions.
And the three data folders are named differently but all without any files.

How can I clean up this? 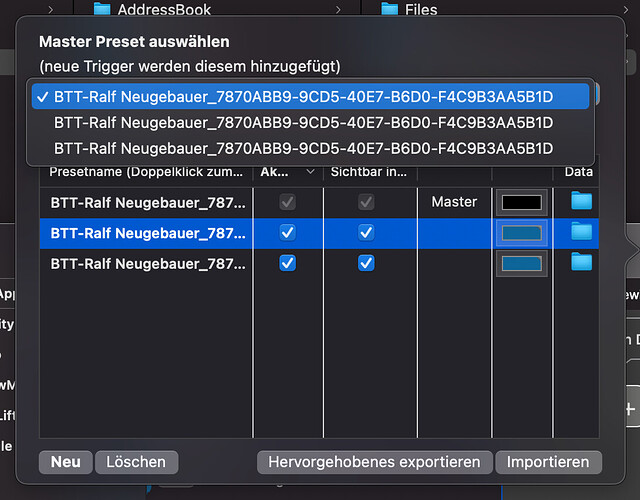 Mh sounds like you reimported the export multiple times (?). However new triggers and so on only get added to the master preset, also BTT should warn when reimporting an existing preset.

If you copy triggers (cmd+c) and paste them (cmd+v) they will always be pasted into the currently selected master preset, so you can use that to quickly copy everythin into the master preset.

Alternatively you can use the menubar item Presets => Move Selected Triggers to preset. However you should first rename the presets (double-click the name) so you can differentiate between them.

Hey Andreas, I did like you suggested, moved selected triggers to the first preset at the top of the three presets, but unfortunately this is also not working: When I deactivate one of the other triggers I can see some apps in the left navigation appearing/ disappearing. I have now taken the courageous step of deleting two of the three presets, saving the first one again and reinstalling everything. At the moment it looks good, I had activated the synchronisation via Dropbox at some point in between, maybe something got mixed up. Thanks a lot for your help!