Making a BTT button visible when music is playing or not

To try to solve this I have on either side of this widget an apple script widget that triggers the 'Next'/'Previous' action. The script for these is as follows: 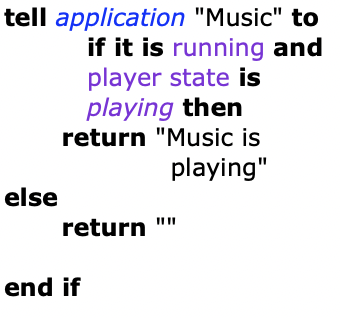 This all works as expected and hides the skip buttons when a song is paused because it returns nothing. The trouble with this is when I try now try to quit the Music application it immediately re-opens... presumably because this script is continually telling it to return a value. Another annoying problem is the skip buttons disappearing in a glitchy delayed manner unless I run the script every 0.05 seconds, which can't be good for battery life!?

Does anyone have any ideas how I can minimize this glitching and prevent the script from re-opening the app when I try to quit it?

I also added a volume slider group that is opened by a Named Trigger that is triggered by a long press of the now playing widget. Surely there's a simpler way of doing this?