Long presses can be configured in various places, but they only allow selecting a named trigger. This precludes easy acces to all the default BTT actions. While I can always create a named trigger containing just the default actions, this is cumbersome, redundant and wastes a lot of space in the Named Triggers section. (I'm actually already having trouble finding my "proper" custom actions quickly because of it.)

So, why not give us the same action selector list for long presses as for any other action? I.e. all BTT actions and all the named triggers as one option among those.

PS: I just saw there are right-click actions now similar to the long presses. The above would apply to those too.

It's complicated to integrate into the UI. I have already made some preparations for the future to make things like this possible (it would then work like when configuring the "cycle through multiple actions" action by opening a new window for configuration)

Just a list of actions would not work, it would need to allow you to configure an action sequence and of course offer all the configuration options for every action. 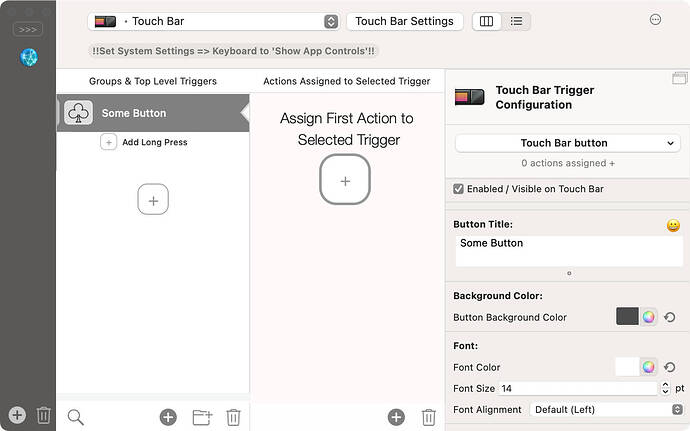 Long press (or long click or right-click or whatever) is removed from the config column for the respective trigger and is instead added in the "Groups & Top Level Triggers" column. (Could also be called "Add Sub-Trigger" and then offer a choice if there are several.) This would seem logical to me since a long press is itself a trigger. Then the long press can be configured like any other trigger—no UI changes needed, just omit all the config stuff that is already present for the parent trigger: 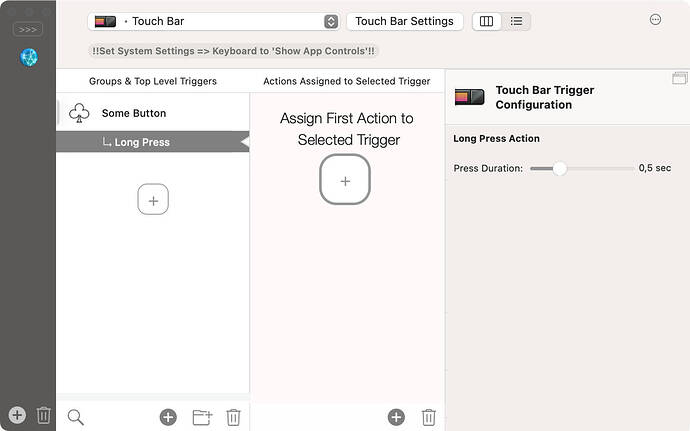 The sub-triggers in the left column could be made collapsible (to keep the list tidy) or not (to ensure no one asks "Where have my long presses gone?!").

Just an idea, but this seems much easier to me—for the user, but possibly even for you to implement...?

that’s not a bad idea

However it’s also pretty complicated to implement - I need to check whether I can make that work.