The idea here is to be able to group Keyboard Shortcuts and be able to toggle them on and off based on the workstation I am at with my MacBook.

On the go, I'd like to use some window positioning shortcuts that are mostly focused on 50% width and similar. But when I am on my workstation with my widescreen 38" screen, I'd like to have the same keyboard shortcuts be usable to make the windows centered and similar.

The best idea I came come up with would be to have groups of keyboard shortcuts, which I can toggle on and off based on shortcuts or other actions.

I tried using presets but could not figure out how to do what I need.

you can use presets for that. Create one main preset, one preset for work and one preset for home.
Then use some trigger in BTT and assign the predefined action "Switch to Preset / Enable Specific Presets" action.

Alternatively you could create a conditional activation group and use the "Connected Wifi Name" variable. 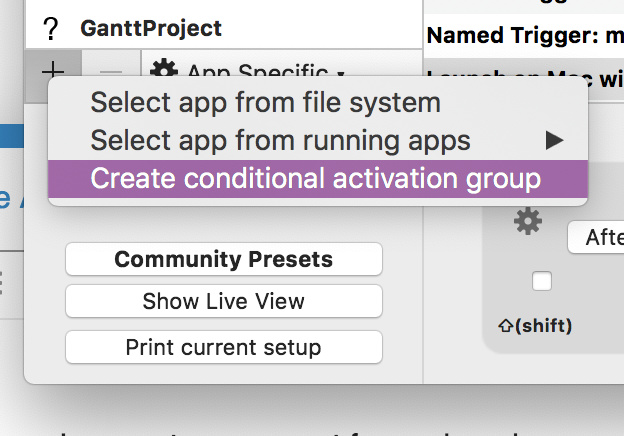 Thank you, that looks promising and I got the Preset thing to work.
One idea on that note though: would it be an idea to add a conditional that we can toggle with other actions? The Presets feel a bit more cluttered but the conditional activation group is something that feels extremely promising.

any reason you feel presets are not good enough for this? (That's basically the use case they were made for :-))

At the moment I would say because their setup is much more complicated than the conditionals (moving shortcuts between presets is not really straight forward and figuring out which is active or which holds the shortcuts is not really visible easily).

An alternative could be to have the different presets displayed in the table of keyboard shortcuts with it's own column and editable there (or maybe something like folders to move around).

But maybe you are already working on all these things with the BTT Redesign you shared on Twitter recently.

you can assign colors to presets to make them visually distinguishable

OK, I was wondering what that color box was gonna do.
Thanks for the support and I am most definitely looking forward to the UI update (if you need beta testers, where do I sign up

Wow this tool is amazing! This allows me to use vimkeys in my pdf reader when not being in a textfield

But one question to get it running in other applications as well: How can I find out which role the focused element has?