How to trigger Mac's native keys

I tried making a separate keyboard shortcut to trigger "Command-[=]", but that doesn't trigger the native increase the font size command. Instead, it just triggers the screenshot shortcut I created. Is there any way I can create a keyboard shortcut that triggers Apple's native keys, instead of my shortcut keys?

I hope this makes some sense... Any help is appreciated!
Karn

Under which app are you wanting to increase/decrease the font size? You might have to manually check the hotkeys in each app for controlling font size and map bettertouchtools to it.

Not a direct answer to your question, but you can change the screenshot shortcut to something else in System Preferences > Keyboard > Shortcuts. 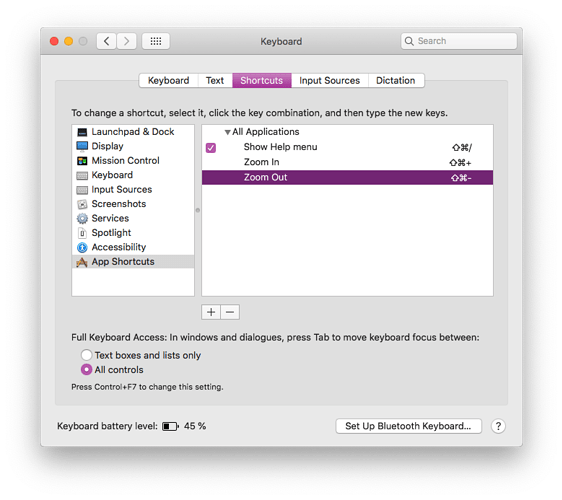 Not all applications have the zoom in and out menu items, but most do. Otherwise I think there is no way to achieve that as this is not a system shortcut but instead defined by each app.

But the thing is, I want to trigger the take screen clipping command with "Command+[=]" because I use the feature so frequently, and that key combination is not only convenient, it is ingrained in my muscle memory. I tried changing to "Alt+[=]", but I just couldn't get used to it.

Is there anyway to create a BTT command where the BTT program will "tell" the mac that a certain input (increase font size) has been registered? Maybe create a BTT shortcut to execute an apple script that does so?

You are trying to do this in a roundabout way, when you can just set both of those shortcuts in system preferences to whatever you want. You could also make a shortcut in BTT to trigger a menu item rather than another shortcut.