New version! Probably one of the biggest yet, a lot going on here. I definitely feel like this is the best version of GC-BTT to date

New version! Last one for today, fixing up final bits before the stable release later this week.

@myhouseblewup Two things I found out: (1) it's not possible to tell the UI to click an item in the volume menu bar but turns out it doesn't matter because (2) the original script does work, haha, turns out pairing is just very, very slow and can take multiple attempts. But... that's just the case normally. So just press the button again if they didn't connect. So much for that fancy W1 chip ¯_(ツ)_/¯

Still trying to figure out how to detect True Tone/Night Shift, but that might not be possible without launching system prefs.

Actual last new version for the day, I think I've knocked off everything that's been reported now

please report issues and I'll get to 'em in the morning!

EDIT: The dock badge scripts really hammer the dock process, so in the next version I've set the various dock badge widgets to only run if the specified app is also running.

New version! A dock on your Touch Bar?!

New version with some fixes

I'd say this is pretty close to the stable release. I haven't encountered any major issues on my machine so far.

New version! Wrapping up browser support. If no bugs are found in this version before @Andreas_Hegenberg releases the new stable BTT, then I think this is going to be the stable version. It's definitely RC1 material

EDIT: Oh man I fixed the Now Playing output bug! Now iTunes widgets can display songs even if they have double quotes in them. Updated version to 2.563-4, haha.

If anyone's wondering, I used this code to escape the double quotes:

New version! Is this version the "Snow Leopard" of GC-BTT?

In seriousness, I think I've got performance to an acceptable level. I'm now seeing some of the lowest energy usage from the preset in a long time on my system. Things also just feel much, much snappier as a result.

EDIT: After a few hours monitoring BTT, I'm really happy with the performance of this version. Honestly, if I wasn't the one who made the changes, I would've guessed that I increased the refresh rate of the scripts because of the sheer performance boost.

Please report on how performance of this version is on your machine so I can make final adjustments! Thanks everyone

New version with Spotify long-press widget! It's a little bit more basic than the iTunes one, but I did leave a bunch of placeholders in the widget for whenever I or someone else is able to get those additional functions working. For now we've got shuffle/repeat and copy track link

New version! @Andreas_Hegenberg this version is very, very stable. What version of BTT do you think is going to be the next stable release?

@Randy_Saeks after testing, I can't reproduce your calendar bug. Have you changed it at all? 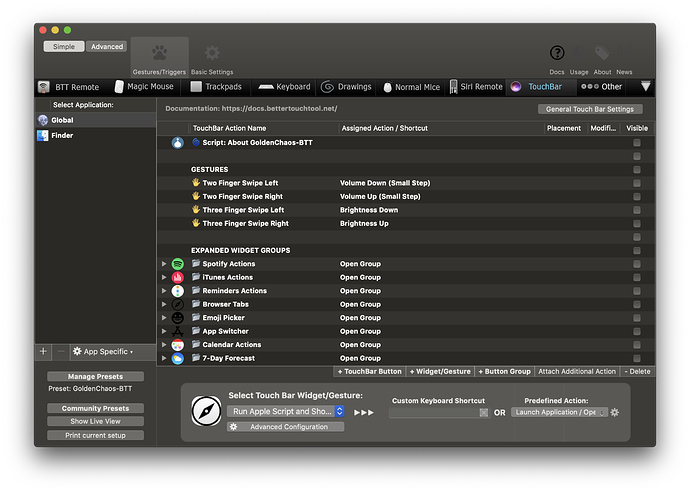 New version again! Since I had some extra time, I made the volume up button display a dynamic icon

it doesn't require any extra scripts since it returns the alternate icons as text in base64. This'll probably be the last update for today, haha.

decided to just replace the current version rather than releasing a new one so soon.

Okay, I lied, I've got one more tiny new version. Couldn't help myself

New version! @Harrumph had an idea that was so good how could I not put out a release at 4am?!

Awesome. I've just uploaded GC-BTT 2.600, and I took the liberty of taking some newer screenshots for you to include in the release notes since it's changed visually from 2.536 quite a bit.

New experimental version with collapsable menu bar on the main screen! @Andreas_Hegenberg what's the timeline on the Reuse Widget functionality?

Please let me know what you think of the collapsing functionality! In particular I'm wondering if the tap target for the chevron is too small.

That is weird. Well, in this new version I moved the location of the toggle scripts, so it should work this time! Hopefully

New experimental version! Quite a few changes in this one.

I recommend disabling the "Animate Group Open & Close" global Touch Bar setting for the best effect in this version. @Andreas_Hegenberg can there PLEASE be a setting inside each button group's preferences to force animating/not animating on group open?

The only thing left is dock settings, I think, so that will be next.