I changed it to system time, and behaviour that I explain happens with that setting
btw, may be we have to create github repo for track bugs/replays more easy?

github is really bad as a bugtracker, I have tried that for a year and this forum so far makes it much easier for me to track any bugs (but if possible post in the bug section in the forum).

Currently the time zone is set when the widget loads the first time, but it should be easy to listen for timezone changes)

@GoldenChaos do you think a subforum for preset bug and feature requests makes sense? I could add that easily and make you a moderator if you want.

Maybe just a Preset Troubleshooting subforum? Feature requests and updates I think can be handled in this thread, but support seems to take up a lot of posts

I guess subforum is really good idea. And would be awesome to have some tags management for posts

btw, I have one more issue that I can't solve — I've customised that preset (disabled some functionality, moved to some keys modifier etc), so as I can understand — there is no easy way to update this preset for me? only reproduce my customization again?

That's correct. It's not the ideal situation, but this seems to come up a lot so I have a feeling it will be dealt with eventually!

Maybe if the importer detects existing widgets/groups of the same type and name it can offer to overwrite them without changing their placement and modifier settings? Still not perfect but would eliminate fewer customizations than the current situation I think. Thoughts @Andreas_Hegenberg?

and could we attach one more widget for english only users?)

It will show keyboard layout for not english only users, and would be awesome to change it by pressing that widget.

I'm a stupid monolingual American so I don't use this menu; it's easy to integrate but I like to understand how the features are used before I implement them. Do you find yourself changing keyboard layouts often (like from conversation to conversation) or is it just a once every now and then thing? Also, where do you keep the input menu bar item typically - always within reach, or do you hide it with a tool like Bartender?

Wow, things move fast in this forum. You guys are awesome.

Is there any way to include autofill for usernames and passwords? That was probably the only redeeming function of the stock Touch Bar. Is it possible to access the keychain for that purpose?

I requested a similar feature a while back, seems like it's not possible: Predictive text Touch Bar widget

I agree, autofill (and the similar predictive text) is the only good part of the stock Touch Bar. I really, really miss being able to type a word for an emoji and see it suggested on the keyboard.

Maybe autofill is different from predictive text though?

when I used default touchbar — I moved widget to touchbar, but currently I moved it back to bar (near watches)

We have option to set language to change layout based on documents, but sometimes we're pressing some buttons to revert Я letter to scare english/american/australian guys

For me, when I change language inputs, I just use the inbuilt keyboard shortcut to do so. I do keep the input icon in the menu. There is an option to switch inputs automatically based on document source... which some times works the way you want it to. So, being able to see what language is being used currently and with the focused window is my preference. 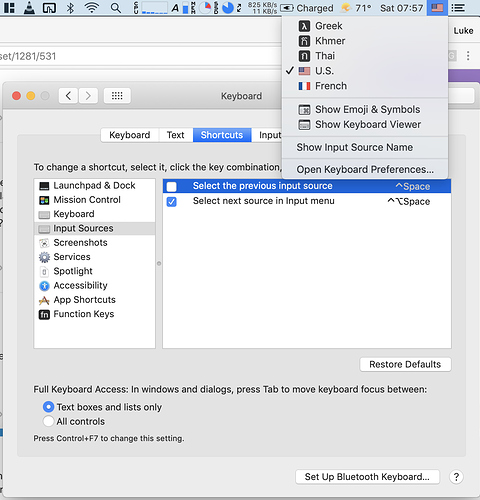 I'm just using the shortcut to cycle languages, which isn't the most direct way. I might experiment with individually setup buttons to change languages, and then have some toggling to show which one is currently active.

I primarily work with a few languages, but rotate different ones in and out depending on which country I'm working on a project with at that time.

HUM. Though, a group similar to how the emoji's work could be cool. If it could update its icon based on the current language automagically, but then on press it opens up and shows each language selected as system input sources. That might be better than multiple direct language toggles?

I think I have a good idea of how to implement this now. I'll work on it for the next update.

If you like, take a look at the ones I posted here: Current keyboard layout

It looks like it was deleted for some reason. I'm sure people on r/apple would love your preset

What the... even when I repost it, it just says removed when I view the post from anywhere but my account. Oh well, so much for that

I'll try again next Saturday or something, haha.

Oh, yeah, you should probably ask the mods why it was removed and you should be good posting it next Saturday

Hey, would it be possible to port an iOS music feature? Could we long-press the music controls to skip 10 or 15 seconds or is this not possible?

First of all, thank you for this marvellous presets. it's so awesome.

Is it normal? or did I miss something?
Thank you

@myhouseblewup I'll play around with this for the next version. I've never used this feature on iOS so I'll try it out there and see how it works both in Music and Podcasts first so I get it right.

@era3z You didn't miss anything, it's supposed to completely replace the default Touch Bar interface! This means that nothing from the original Touch Bar will show up while using GoldenChaos-BTT. However, if you need the stock Touch Bar UI for whatever reason, you can press the keyboard shortcut cmd+opt+shift+t anywhere to toggle back to the stock Touch Bar.