Curious about performance of replacing TouchBar with BTT (options possible)

Users can now instead of TouchBar provided by macOS show TouchBar options from BTT.

Does it mean that macOS still renders out the TouchBar somewhere even though that is not shown. My concern is that from these options: 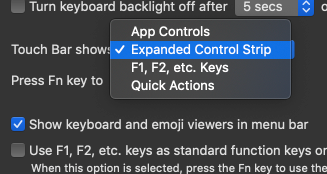 It seems to me that App Controls is the most battery intensive option as it changes a lot as you change between the apps. And I'd think that even with BTT touchbar on, macOS will be doing that App Controls stuff under the hood (for no reason). Or BTT says to macOS to literally turn off touchbar and take over.

In short I want to know if it's actually better to use Expanded Control Strip (which shows no elements) or App Controls or it doesn't matter.

BTT is just displaying a modal touchbar above the system touch bar. While the system is smart enough to not render it if overlayed, there might still be some calculations happening in the background, so in theory expanded control strip could be better.