Better management for switching between different actions for a single gesture

So I might be missing a feature somewhere, but as far as I've researched I don't think there's an easy way to achieve what I'm looking for.

There a few situations where I want to change the actions of a whole set of gestures/triggers. For example, change all 4 finger swipes from controlling media keys and volume to controlling my PowerPoint (regardless of current application). So let's say I add these 4 gestures in "All Applications" settings alongside the previous 4 gestures I had, BTT will create a menu every time I trigger 4 finger swipes enabling me to choose between 2 actions. So far so good, but let's say for some time I only want to use 4 finger swipes for controlling PowerPoint, disabling the original actions will still trigger the menu. I guess I could use presets, but switching to a different preset for using the PowerPoint gestures will disable all other actions configured in my main preset. Of course, I don't want to have to work with 2 identical presets with only the 4 finger swipes differing between both.

Could there be a method for quickly switching between different actions for a single gesture? Maybe give priority to the top-most actions in the list? Or at least disabling some actions should not trigger that menu.

In general application specific triggers override the ones in the „all apps“ section. So if you configure them differently for Powerpoint, it will override the global settings when powerpoint is active.

Alternatively, instead of adding it to „all applications“ you can create a conditional activation group which matches all applications with some exceptions (e.g. Powerpoint). Would this solve your issue?

Not really actually, because in this specific case I want to control the PowerPoint while using any app (through "Control Specific App" action).

I also use Ableton as my music DAW and it has 2 main layouts, one for composition (arrangement view) and one for live performance (session view). I use 3 and 4 finger swipes to quickly show/hide different windows and I want the finger motions to remain consistent with the layout (in one view, the same window will be placed horizontally and in the other view vertically). So in short, I want to switch between 2 different configurations for a same application. 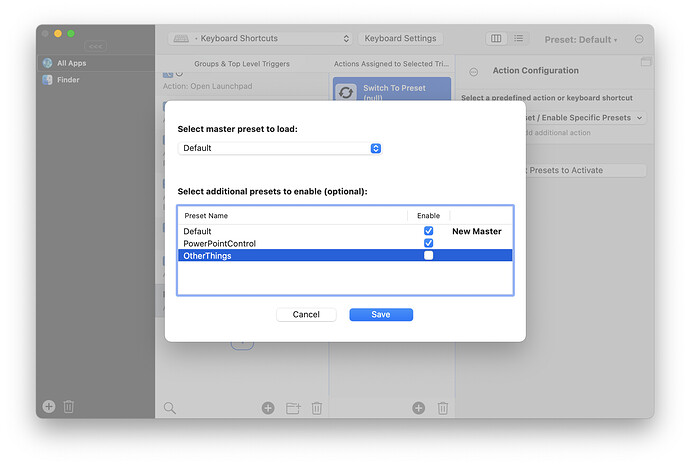 (For configuring you temporarily need to set these presets as master)

You can also create conditional activation groups that listen to a custom variable which you could toggle using a keyboard shortcut.

Oh, I see, so you're suggesting creating 2 additional presets (different from my main preset) and enabling one and disabling the other to switch between both configurations?

I think that's a good solution. I do think though that disabling actions (or a folder, disabling all actions included in it) should discard the actions, therefore not triggering the menu if only one action remains enabled.

It should already do that, are you sure this doesn't work for you? 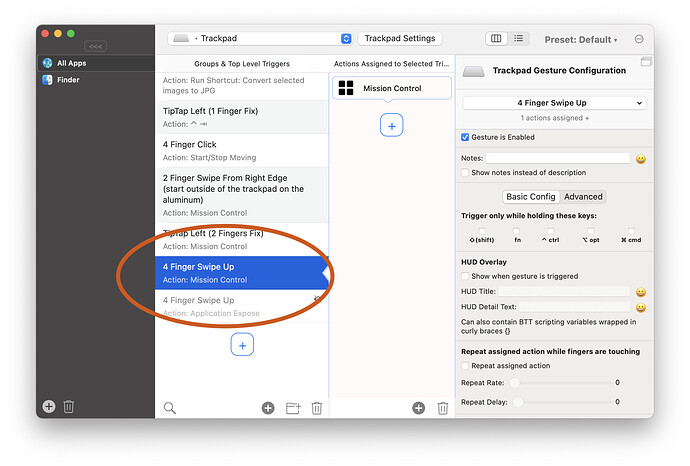 In this case it only shows the menu when the second four finger swipe is not disabled.